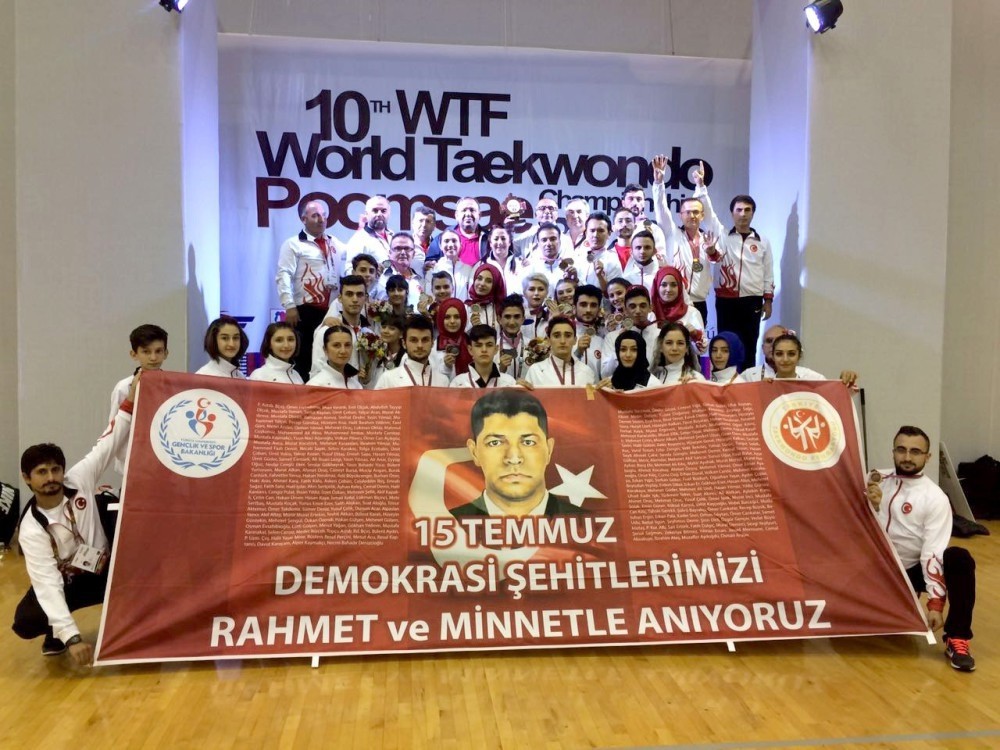 Turkey's world's second-ranked Taekwondo Poomse team commemorated the martyrs Turkey lost during the foiled coup attempt on July 15. The team poses with a banner of the late sergeant u00d6mer Halisdemir, who was killed by coup plotters in Ankara.
by Daily Sabah with Wires Oct 05, 2016 12:00 am

"This is the result of years of hard work. But we never confine ourselves to results. We aim to achieve more. Turkish taekwondo athletes will continue to make Turkish people proud." Turkish teams won a total of 72 medals in the European Cadets, European Para Taekwondo, Balkan Taekwondo and World Taekwondo Poomsae tournaments.

At the 10th World Taekwondo Poomsae Championships held Sept. 29 to Oct. 4 in Lima, Peru, Turkish athletes won five gold, four silver and seven bronze medals. On the first day of the competition, Turkey's Kübra Dağlı and Emirhan Muran bagged the gold in the pairs under 17 category, while Mevlüt Pekcan and Olgun Kahveci later won gold for the category over 30. Elif Aybüke Yılmaz won the most valuable player award in the female category after claiming gold in the individual female under 30 division. 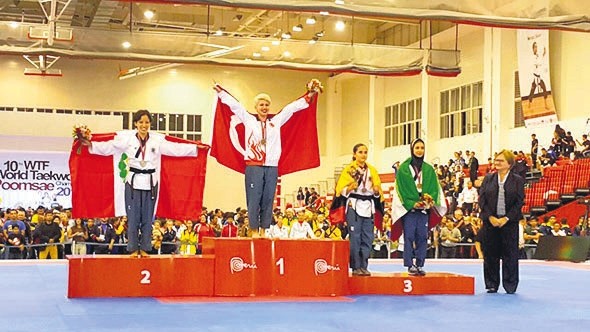 Turkey's Elif Aybüke Yılmaz won gold in the individual females under 30 division, with Peru's Marcela Castillo Tokumori coming second and Marjan Salahshouri from Iran and Claudia Cardenas from Ecuador both winning bronze. In the freestyle event, Vietnam beat Turkey to win gold in the teams under 17 division, while Russia and the USA won bronze.

The Championships came to a close on Sunday with the first lady of Peru, Nancy Lange Kuczynski, attending the final day's action, which delivered a total of 10 gold medals to athletes from six different countries - Chinese Taipei, Vietnam, the Republic of Korea, Australia, Turkey and the Philippines.

A total of 55 countries and 760 athletes took part in this year's Championships - a record for the event - with the Republic of Korea topping the medals table and Turkey following in second place, said the World Taekwondo Federation.
RELATED TOPICS