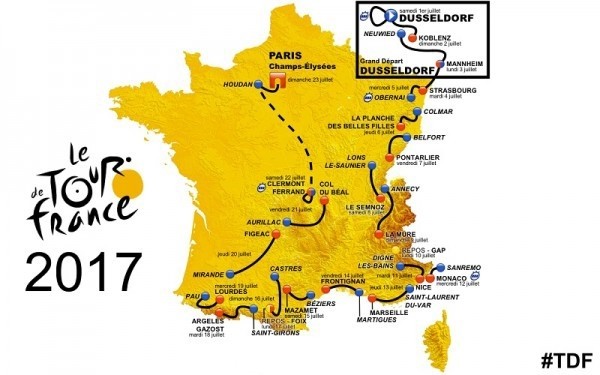 Let us take a look at five of the key stages that could ruin the best-laid plans of many a rider after organizers revealed the route of the 2017 Tour de France on Tuesday.

Longwy (3rd stage/202km): The stage runs through three countries and is one for the punchers such as world champion Peter Sagan or home champion Julien Alaphilippe. Organisers suggest there will be a strong possibility of cross-winds over rolling hills and valleys and are expecting a big breakaway. Belgian Philippe Gilbert won here on the Tour's last visit and Tony Gallopin won here as a junior. "There's danger every day and we always lose someone in the first week," Dan Martin pointed out.

Chambery (9th stage/181km): Before a nail-biting descent to Chambery three beyond-category climbs and a category one mountain await any pretender to Chris Froome's throne. The Tour may not be won here, but several riders might wave good-bye to their ambitions. Top of the menu is the ascent of the Grand Colombier, 8.5km at almost 10 percent average gradient featuring sections at 22 percent. The most up and down stage on the race.

Foix (13th stage/100km): Tour director Christian Prudhomme says "who dares wins" this Tour and on this super-compact 100km course with three brutal Pyrenean climbs after a gruelling stage twice as long the day before, the organiser himself pointed the finger at this stage as one for initiative and guts.

Le Puy-en-Velay (15th stage/165km): Prudhomme was again at pains to point out that some of the hilly stages, and particularly this one, would provide a show. It is so winding and narrow no team will be able to organise anything. "It could be chaos," he said. It's another stage where wind could isolate a rider and ruin his Tour.

Izoard (18th stage/178km): There will be much gasping atop the 2,360m summit of Izoard where the lunar landscape itself would be enough to disorient most mortals. This is the top mountain stage of the Tour de France and a powerful performance here could clinch the title for someone. Even the Col de Vars before it is at 2,109m. But the Izoard is the backdrop that Prudhomme, who forever has the television images foremost in mind, has planned to 'amplify the exploits' of his champion.