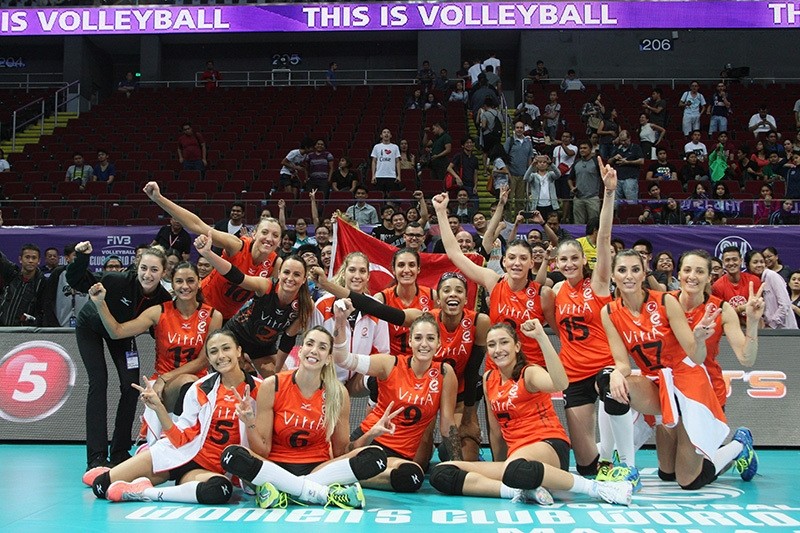 Eczacıbaşı VitrA went down in the history books after they edged Pomi Casalmaggiore in five nail-biting sets in the final of the 2016 FIVB Women's Club World Championship, becoming the only club to have won the trophy twice

Turkey's Eczacıbaşı VitrA women's volleyball team retained their world title in a 3-2 over Pomi Casalmaggiore of Italy in Philippine capital Manila on Sunday.

Eczacıbaşı completed a fascinating week in Manila undefeated, extending their competition winning streak to eight, including their last three matches in 2015 in Zurich. Led by an incredible Tatiana Kosheleva and the tournament's MVP Tijana Boskovic, Eczacıbaşı had to pull out all the stops to deny Pomi becoming the first Italian club in 14 years to claim the world crown. The runners up had to be content with being only the third Italian club to make it to a Club World Championship final. Nineteen-year-old Boskovic led a Dream Team of the stars of the 2016 FIVB Club World Championship, which also included herself as opposite.

A little earlier VakıfBank had added a bronze medal to their collection of gold from 2013 and silver from 2011, when they beat Volero Zurich in four sets. In a way it was revenge for their earlier loss to the Swiss side in pool play. It left Volero in fourth place for the third time in four bronze medal match appearances in as many years. Rexona Sesc Rio de Janeiro reached their (secondary) goal of fifth place, though they did get a run for their money from Hisamitsu Springs Kobe in their five-set win in the highest-scoring match of the tournament.

That fifth place is lower than their previous two showings of a silver medal in 2013 and fourth place last year and the Brazilian side must surely feel gutted after taking both the tournament's finalists Eczacıbaşı and Pomi all the way in the "pool of death" and just barely missing out on a spot in the top four after dropping both the tie-breaks.

Hisamitsu Springs wound up sixth, which is one position lower than their two previous appearances in 2014 and 2015 - but they're already looking forward to hosting next year's edition in Kobe, May 8 -14. It will be the first time that the FIVB Women's Club World Championship has come to Japan, following events in Brazil, Italy, Qatar, Switzerland and the Philippines. The local side of PSL-F2 Logistics Manila, an all-star team of the Philippines Super League with the addition of a few foreign players, wrapped up their campaign with their fifth defeat in as many matches - this time in straight sets to Bangkok Glass.

It was the first win in the tournament for Bangkok Glass, who finished seventh. Indeed it was the very first win by any Thai team in nine matches at the Club World Championship - including the two appearances of Federbrau Bangkok in 2010 and 2011. The Filipino side may have finished eighth, but the players' remarkable fighting spirit (especially during pool play) got the crowds going every time and the legacy they leave behind for volleyball in the country has been huge.

With four gold medals by Fenerbahçe in 2010, VakıfBank in 2013 and Eczacıbaşı VitrA in 2015 and 2016, Turkey also became the most successful country of the tournament, a title which was previously shared with Brazil.