'Cursed' Cubs back in World Series after 71 years 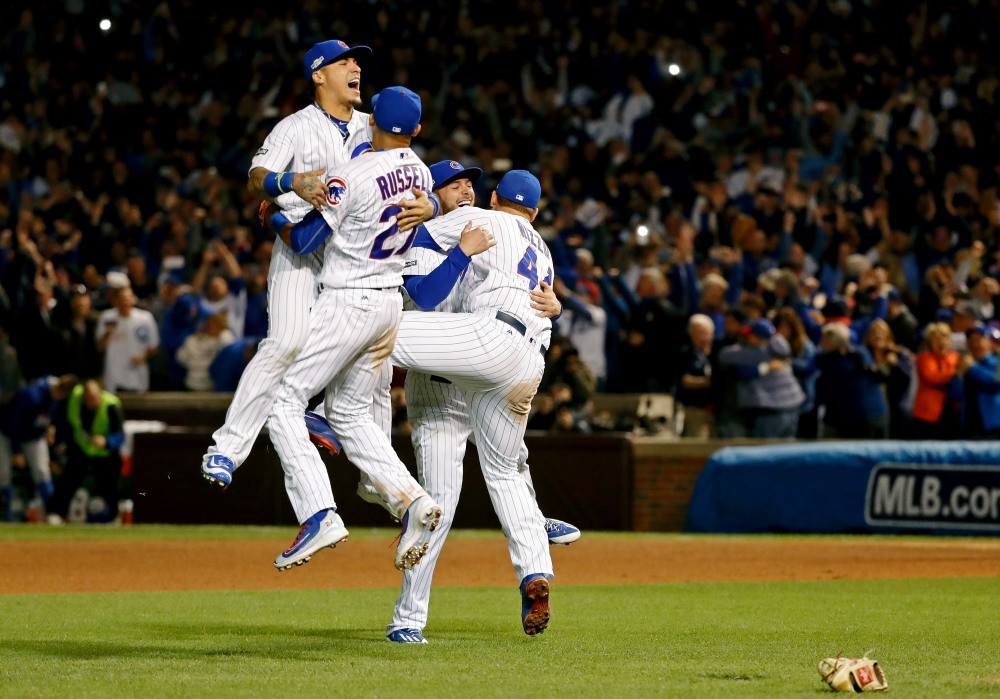 Jubilant fans of the Chicago Cubs erupted in celebration when the franchise clinched a berth in this year's World Series, pumped up by the dizzying prospect that their team could win Major League Baseball's top prize for the first time since 1908

Chicago's North Side turned into a roving street party as thousands of people wearing "Cubbie" blue spilled out of Wrigley Field after witnessing the team vanquish the Los Angeles Dodgers 5-0, giving the Cubs the National League championship for the first time in more than 70 years. Long known as "lovable losers," the Cubs now have their sights set on an even more elusive prize: winning the franchise's first World Series title in more than a century and ending the longest drought of its kind in professional sports.

The relief felt by fans after Saturday's convincing victory over the Dodgers and their ace pitcher Clayton Kershaw was magnified by the team's agonizing history of ineptitude, but that also tempered their excitement with the World Series looming.

"I've been waiting my whole life for this, I just wish my dad could have lived to see it," said Ryan Jones, 42, a fan from Chicago's western suburbs who wiped tears from his eyes while celebrating with his two sons outside of Wrigley.

"But as amazing as this feels, the Cubs still have a lot of work to do to win this."

Fireworks could be heard across the city after the Cubs turned a dramatic double-play to seal the win and continue a dominant season. Don Cizek, 56, a fan from Chicago's suburbs who was celebrating outside of the ballpark, said he was cautiously optimistic after Saturday's victory.

"I had my hopes pinned on the Cubs closing it out tonight and I was chewing my knuckles right up to the end," he said.

"I can't believe we've finally made it. It's going to be a tough World Series against Cleveland but tonight we're going to party all night to celebrate."

Like the Boston Red Sox, who battled the so-called "Curse of the Bambino" after trading away legendary slugger Babe Ruth in 1920 to their arch rival New York Yankees, the Cubs have their own bad luck legend: the "Curse of the Billy Goat."

In 1945, the owner of the Billy Goat Tavern, Billy Sianis, was supposedly asked to leave Wrigley because the smell of his pet goat was disturbing other patrons. Sianis allegedly vowed the Cubs would not win any more, and the team has not returned to the World Series since losing that year to the Tigers. For decades, the Cubs have played in iconic Wrigley Field where the 102-year old ballpark's ivy covered outfield wall and manual scoreboard served as backdrop for memorable wins and crushing losses.

The team's diehard fans stuck with the team despite its failures. They watched, and waited, as Chicago's other sports franchises racked up championships. Even the cross town rival White Sox ended their own decades-long title drought, winning the World Series in 2005.

"Across Chicago and around the world generations of Cubs fans, from the very young to the very, very old, are celebrating tonight," Emanuel said in a statement.

"Rightfully so. We are witnessing history right before our eyes," he added.

The Cubs have had a few close calls since 1945, including 1984, when Chicago was one win away from going to the World Series but lost three straight games to the San Diego Padres.

On Saturday, Cubs manager Joe Maddon, said the team was looking forward to the World Series, which begins Tuesday in Cleveland, Ohio. The Cubs will take on the Cleveland Indians in the best-of-seven series.

"Four more (wins) and we can really have a party," he said.