Olympic debut promises to shine a light on Karate 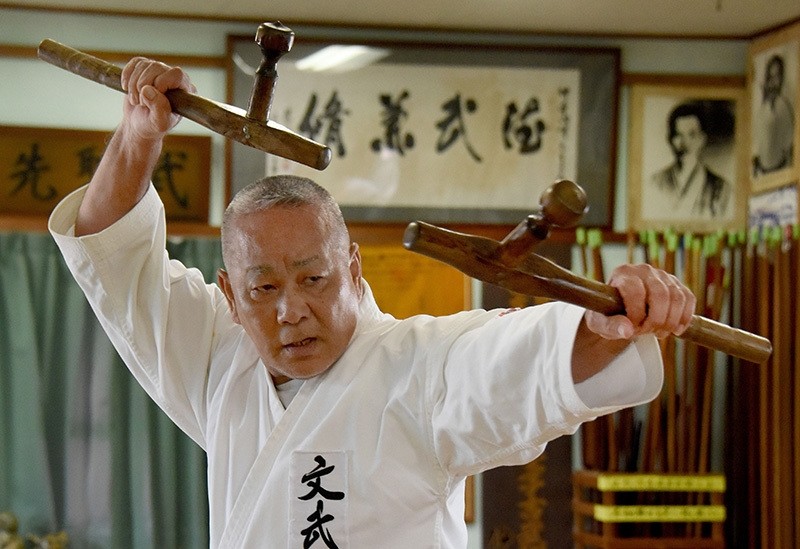 Karate master Takashi Nakamori, a high-ranking expert of the Okinawa Kobudo traditional weapons system, using a pair of ,tonfa, to demonstrate his skills at a training hall in Naha, Okinawa prefecture, June 18, 2016. (AFP Photo)
by Oct 25, 2016 12:00 am

Hollywood may have kicked karate onto the world stage, but its first-ever inclusion at the Tokyo 2020 Olympics promises to shine a light on the rich history of the discipline.

At 78, sensei Masahiro Nakamoto has been waiting decades for this decision, insisting there is far more to the martial art than the caricature depicted in films such as Karate Kid and by action stars Chuck Norris and Jean-Claude Van Damme.

"This is the art of defence," the karate master told AFP at his dojo in Naha, Okinawa -- an island chain some 600 kilometres (375 miles) from the southern tip of mainland Japan.

"You don't go just kicking and punching, you receive your opponent's blow. Defending yourself translates into offence," he added.

At the Tokyo Games, 80 competitors will take part in the Karate event. It joins surfing, skateboarding, climbing and baseball-softball as new sports included for the 2020 edition.

"The dreams of the world's karate athletes came true when the (International Olympic Committee) made its decision," said Japan Karate do Federation vice president Shigeo Kurihara.

A blend of indigenous fighting styles, karate was born in Okinawa in the 15th century when the area was ruled by the independent Ryukyu Kingdom. Strong trading links meant the sport was also influenced by Chinese martial arts.

It is far older than the modern Olympics and today has at least 10 million registered practitioners worldwide, and yet it has struggled to make the case for inclusion in the Games.

By contrast, judo, a Japanese martial art, and Korea's taekwondo are already permanent fixtures on the roster. Judo made its Olympic debut when Tokyo hosted the 1964 Games while taekwondo made its first appearance at the global event in 1988.

Integrating karate into the Olympics has been delayed by divisions in the movement around the world, with stalwarts long preferring to adhere to their interpretation rather than to work together to create an global art form.

"It took a bit too long to modernise the rules of competition," he admitted.

Sport karate, for example, calls for competition rules where opponents have to control their blows, while traditional karate allows for harder shots but requires significant protective gear, such as boxing gloves and helmets.

The martial art was only brought to Tokyo in the early 20th century when Gichin Funakoshi, regarded as the father of modern karate, moved from Naha.

"Okinawa was the place where karate's spirituality developed," explains Kurihara.

Frustrations remain however, that Okinawa's role in the development of karate has been airbrushed out of history. For Nakamoto, the Olympic Games in four years time, is a chance to redress that.

"This is a great chance to show the world where karate has its roots. The world may be surprised to know that it was developed here," he said, adding that it was inexorably linked to the island chain's politics.

A vital tool of diplomacy at the time -- keeping leaders on good terms with China and Japan.

"Brewers could sell their surplus so it was the jobs of karate masters to protect convoys from robbery," Nakamoto said.

"In summer, they would rest outside and drink the spirits -- so it became part of the skill, to defend ourselves from attack while drunk, or asleep."

Karate expert and author Stephane Fauchard insists inclusion at the Tokyo 2020 Games will bring people to the sport.

"This is going to boost the sport's visibility. The Games are a great showcase," he told AFP.

He explained: "Sport karate will continue to develop in national federations while traditional karate will still be taught in schools. They'll both benefit from the media attention brought by the Olympics and continue to exist side by side."

Karate will still have to prove its credentials to retain an Olympic sport beyond 2020 however, the IOC will review whether its inclusion was a success.

Didier argues it's clear why karate should remain in the games after 2020.

"Karate is relatively inexpensive, and athletes compete in the same arena as their judo and wrestling counterparts, and can be run over a few days."