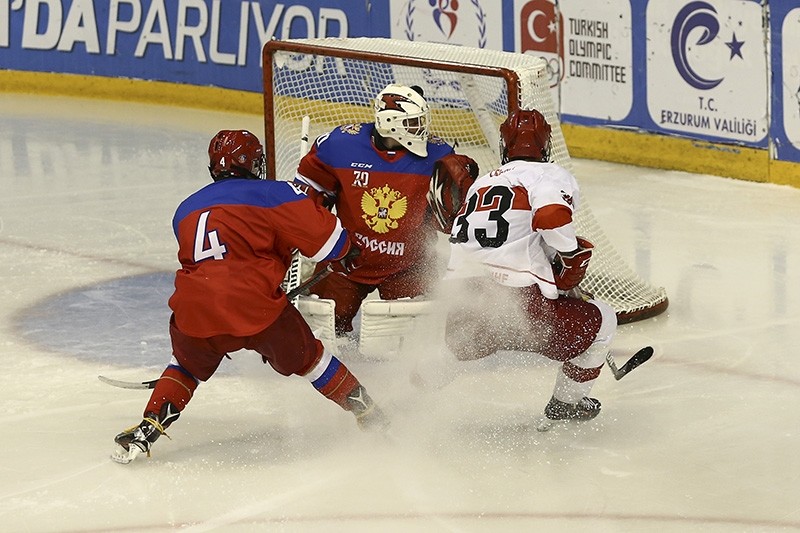 Despite mediocre level of success and lack of continuity, Turks are assertive in most sports, but winter sports are generally not one of them. However, Monday's 42-0 blowout was a little unprecedented, with many people taking to Twitter trying to laugh it off.

At the opening game for ice hockey at the European Youth Olympic Festival 2017 (EYOF) held in Turkey's northeastern city of Erzurum, the hosts suffered a 42-0 defeat against Russia, which often dominates winter sports and we all know that Russians are certainly no stranger to winter.

The first period ended in a 15-0 lead for Russia as a sign of what was yet to come in the two remaining periods, which ended 27-0 and 42-0, respectively.

Despite the poor score, the audience supported the home team until the end of the match, trying to show the young men that sports is all about competition, not winning.

Being two historical rivals, Turkey and Russia have enjoyed closer relations in the past couple of months after backing opposite sides in the Syrian civil war, which culminated in a diplomatic crisis with the downing of a Russian jet on Nov. 24, 2015. Relations gradually improved after Turkish President Recep Tayyip Erdoğan and his Russian counterpart Vladimir Putin exchanged talks in June 2016, and the defeated coup in July 15 opened an era of cordial relations between two countries to the extent that the assassination of Russia's envoy to Ankara, Andrey Karlov, on Dec. 19, brought the two nations even closer, leading to joint military operations, humanitarian efforts and a country-wide ceasefire orchestrated by the two countries in Syria.

However, the defeat came at a time when relations between two countries started going south over the deaths of three Turkish soldiers on Thursday in a 'friendly-fire' by Russian jets in northern Syria.

The junior ice hockey team received their fair share of criticism on social media by many who are frustrated with the tumultuous relations between the two countries, with the score and hashtag #buzhokeyi (ice hockey) becoming national trend topics on Twitter.

Ice hockey is a relatively new sport for Turks, however, the overall interest is on the rise. The Turkish Ice Hockey Federation was established in 1991 and became a member of the International Ice Hockey Federation (IIHF) the same year. Since 1993, a national ice hockey league has been organized, with the number of participating teams steadily rising.

As an unfortunate coincidence in the wake of the match, the Turkish national ice hockey team currently ranks 42nd out of 50 national teams in worldwide standings.