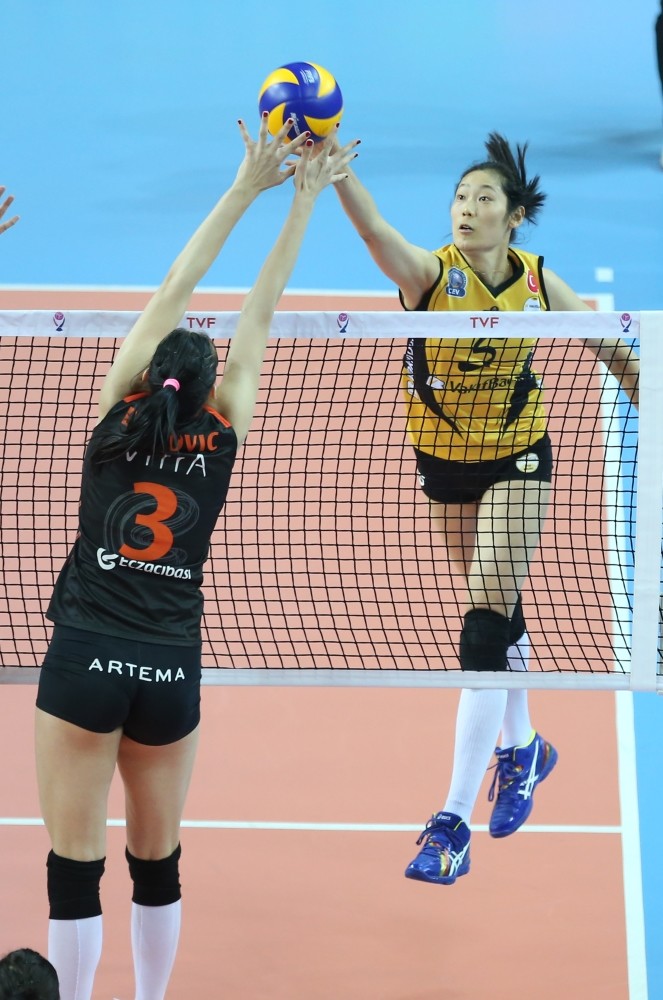 VakıfBank, with a perfect 4-4 record in Pool D of the 2017 CEV Women's Volleyball Champions League, are looking to extend their streak today as they take on city rivals Eczacıbaşı VitrA at the VakıfBank Spor Sarayı

Since 2011, VakıfBank have dominated Eczacıbaşı VitrA, winning 10 of their 11 matches and three points will secure them a spot in the six-team playoffs. This season, Zhu Ting has been VakıfBank's best scorer, with an average of 5.2 points per set while Milena Rasic has been the best blocker with one kill block per set. "It goes without saying that Eczacıbaşı VitrA have a very strong team and it is only obvious that this match is going to be very difficult," said VakıfBank head coach Giovanni Guidetti.

"We are prepared as always and we are confident we can win. I am very pleased with the performance of my players, they have been delivering these last few weeks. I expect them to put up a real fight," he said.

Meanwhile VakıfBank setter Naz Aydemir Akyol said, "We won our last match against Eczacıbaşı in the national league 3-0, but that is history now and has no meaning ahead of Wednesday's match."

"The CEV Women's Volleyball Champions League is a completely different story and the importance of this match is much bigger. These two teams know each other very well and we know what we have to do everything possible in order to win. We are aware that a tough fight awaits us and as a result, we have specifically prepared for this match better than any other. We have to win this game to finish first in our pool and reach the playoffs and I hope we can achieve that goal," she added. Turkish and Romanian teams took top honors at first Snow Volleyball European Tour stop

Elsewhere, the first stop of the 2017 CEV Snow Volleyball European Tour came to an end on Sunday at Erciyes, with teams from Turkey and Romania claiming the top honors in the men's and women's competition, respectively. Murat Giginoğlu and Safa Urlu claimed an all-Turkish men's semi-final as they beat Emir Kavuzlu and Kemal Şah 11-8, 12-10. Hasan Hüseyin Mermer and Ali Osman Nurettin followed suit as they rallied to an 11-8, 12-10 victory in their matchup with Dündar Yıldırım and Borak Pelenk. Kavuzlu and Şah settled for the bronze medal as they won the "small final" with Yıldırım and Pelenk in three sets (11-8, 9-11, 11-4).

Later on, Giginoğlu and Urlu, one of Turkey's most accomplished beach Volleyball pairs, celebrated their first major success on snow as they claimed a close final match with Mermer and Nurettin 2-1 (11-8, 9-11, 11-9).Meanwhile, in the women's semis, Turkey's Merve Nezir and Esra Betül Çetin beat Aleyna Vence and Nursel Yaren Sencel 2-0 (11-8, 11-4), in another derby starring two teams from the host country. Romania's rising Beach Volleyball stars Adriana-Maria Matei and Beata Vaida won the second semi-final as they beat Silvia Poszmikova and Eva Elekova of Slovakia 2-0 as well (11-3, 11-8). Matei and Vaida eventually crowned their campaign with gold on Turkish snow as they beat home stars Nezir and Çetin 3-1 in the "big final" (11-7, 20-18, 12-14, 11-8). Poszmikova and Elekova clinched bronze as they edged Vence and Sencel in the third place match (6-11, 13-11, 11-5). The 2017 CEV Snow Volleyball European Tour will resume next weekend with a second stop, which will be taking place in Spindleruv Mlyn, Czech Republic. The tournament at Mount Erciyes coincided with the first ever international Snow Volleyball competition organized in Turkey, with a second set to follow in early March at Mt. Uludağ.
RELATED TOPICS