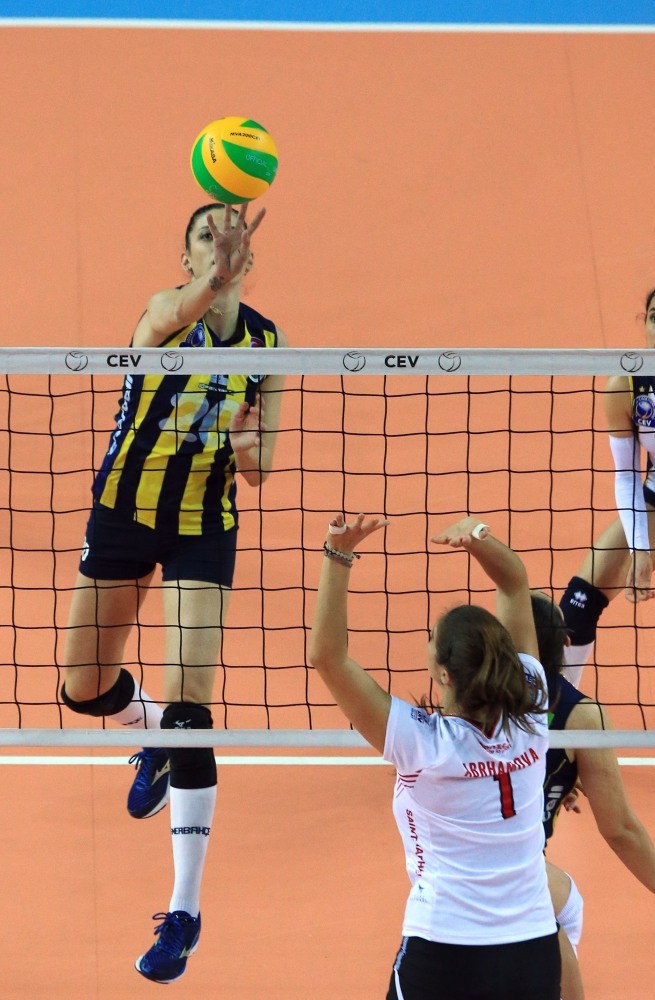 by Daily Sabah Mar 02, 2017 12:00 am
Fenerbahçe emulated city rivals VakıfBank by completing a clean sweep of the matches they have contested in the group stage of the 2017 Women's CEV Volleyball Champions League. Fenerbahçe did so by rallying to their sixth straight victory in Pool C after edging France's St. Raphael 3-0 (27-25, 25-22, 25-21). The first set was a close race with the visitors from France claiming a small edge at the first technical time-out (8-7).

After the break, the reigning French champions scored point after point and reached the second technical time-out leading by as many as five points (16-11). After trailing 13-19, Fenerbahçe got back on track scoring three times in a row and eventually cut their deficit to one point at 19-20. Fenerbahçe trailed again at 21-23 but finally came out on top at 27-25 after completing their comeback.

The second set followed the same trend with St. Raphael leading 8-4 and 16-11 at the first and second technical time-outs respectively, before Fenerbahçe scored six times in a row to edge ahead at 17-16.

At this stage, the course of the match changed and the Yellow Angels rallied to a 25-22 win to double their lead in the match. The third set was a close race too with Fenerbahçe claiming a small edge at the first and second technical time-outs (8-7, 16-15) before cruising to a 25-21 win to seal their sixth straight victory in the pool.

"We already knew we would finish first in the pool; as a result, we played with a completely different line-up than the usual one, yet we won 3-0. We have been working hard lately and are preparing for our matchup with VakıfBank coming up this weekend in the national league. This is our main goal for now. We are waiting for the draw on Friday to know the name of our next opponent in the playoffs," Merve Dalbeler Seniye, the libero for Fenerbahçe, said.

Meanwhile, the head coach of Fenerbahçe Marcello Abbondanza also commented on the win, saying, "It's a good victory for us. The match was not that important since it was our last in the pool and we would finish first in the group anyway. However, the players who do not get a chance to play that often got an opportunity to take the court today. We showed some good things, especially when we fought back after trailing early in the sets. Now we will wait for the results from the draw."
RELATED TOPICS