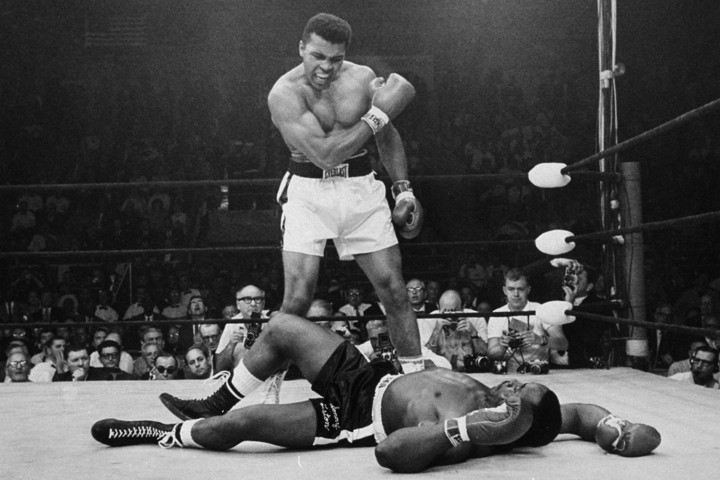 In this May 25, 1965, file photo, heavyweight champion Muhammad Ali, then known as Cassius Clay, stands over challenger Sonny Liston, shouting and gesturing shortly after dropping Liston with a short hard right to the jaw, in Lewiston, Maine.
by reuters Mar 11, 2017 12:00 am

The World Boxing Super Series, a tournament for top fighters with $50 million in prize money and the Muhammad Ali Trophy up for grabs, will be launched in September

The international professional boxing is breaking new ground. A new tournament with a prize money of 50 million dollars was presented on Thursday in New York. The world's best boxers of a weight class compete against each other. The elimination tournament will feature two weight classes in the inaugural season with eight boxers in each category. The quarter-finals will be held in September and October, the semi-finals in January and February 2018, and the finals in May. Half the 14 bouts will be staged in the United States and half in Europe on individual fight nights, according to preliminary plans with no deals yet in place with promoters or fighters.

"Boxing has really been missing a big tournament like the World Boxing Super Series," Richard Schaefer, the former Golden Boy Promotions executive who is in charge of the U.S. side of the tournament, told reporters. Schaefer said the winner in each weight class will pocket at least $10 million as prize money and bonuses will be paid through all rounds of the series. They will also be awarded the golden Ali trophy, designed by Silvio Gazzaniga, who designed the FIFA World Cup Trophy.

"The fighters we want to attract should include current world champions, former world champions, young and rising stars, really a mix so you have the proper storylines," said Schaefer. Boxers rated within the top 15 of the main federations (WBA, WBC, IBF, WBO) will be considered with a panel of former fighters, journalists and broadcasters among those deciding who to invite. Four boxers will be seeded in each class and at a televised "Draft Gala" in June will select their first opponents. The weight classes have yet to be decided. An agreement is already in place to sell global broadcast rights for three seasons of the tournament everywhere excluding the United States and Scandinavia. Showtime executive vice president Stephen Espinoza attended the launch announcement and said a "framework" of a deal was in place for the U.S. cable network to broadcast.

"It's easier to schedule," Espinoza said. "Here are four dates in September, October that I know are written in stone. I know what they cost, I know it's not going to move. That's a much easier way to program, schedule and market."