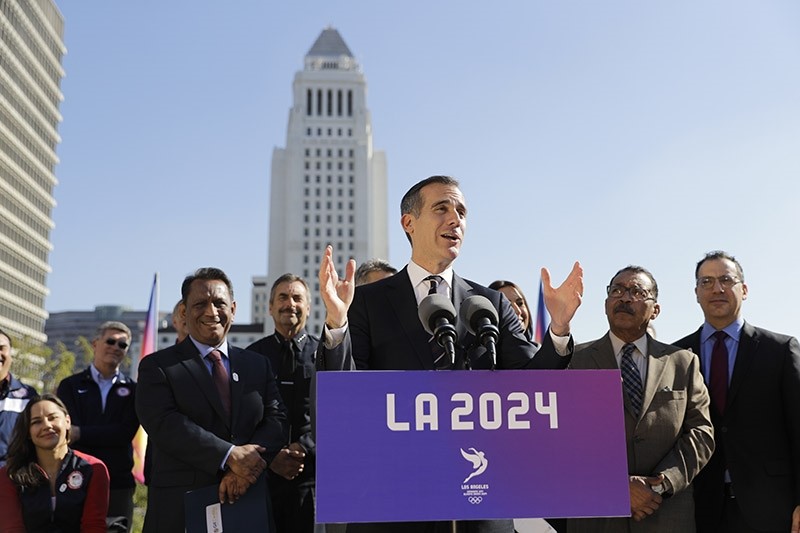 Los Angeles on Wednesday accused rival Paris of being behind reports that the US city bought Facebook "likes" to artificially boost it's bid to secure the 2024 Games.

Campaigning by the two cities is reaching a peak ahead of an International Olympic Committee decision on September 13 on which of the two will host the 2024 Olympics.

French radio station RTL said on Monday that the LA 2024 bid had used fringe internet companies to buy "likes", so it could announce that it had become the first Olympic bidder to attract more than one million Facebook fans.

Companies based in Pakistan, Bangladesh and Nepal are known to be used to buy social media "likes".

"All Facebook advertising has been purchased directly through Facebook. It's no surprise that this story originated from Paris," LA 2024 spokesman Jeff Millman told AFP in a statement.

"LA 2024 is a global campaign as the Olympic movement is global. There are Olympic stakeholders in every country.

"Bids advertise on traditional and social media, and all Facebook advertising has been purchased directly on Facebook."

A report picked up by several media documented a sudden boost in fans on the LA 2024 Facebook page, increasing from just over 200,000 at the end of 2016 to more than a million in April.

At the start of the year most of the LA "likes" had come from the United States but since then fans from developing countries such as Pakistan, Bangladesh and Nepal have dramatically increased.

Millman said there was a logical explanation to the sudden spike in "likes" from far off countries.

"Facebook advertising is more efficient in countries where there is less competition from other brands," he said.

Over the same period, Paris also saw its fans grow threefold but 80 percent of its new Facebook "likes" came from France, with many of the rest from francophone countries such as Algeria and Tunisia.

Reports of the spike in LA's social media popularity came as Los Angeles and Paris lobbied international sports leaders at the SportAccord convention in Denmark.

"All eligible IOC member voters live outside the United States, including Pakistan."

The Paris bidders said on Wednesday they were hopeful of avoiding a spat on this issue.

"This competition must abide by the rules of fair play, it really has to be respectful," Paris Mayor Anne Hidalgo told AFP.

"In politics or sport it is better to look after your own business rather than worry about your rival.

"What's important for me is to show Paris in its best light and show why the 2024 Games should be held there."

Yet on Tuesday, Paris paid for a front page advert on the international edition of the New York Times, drawing criticism from Los Angeles.