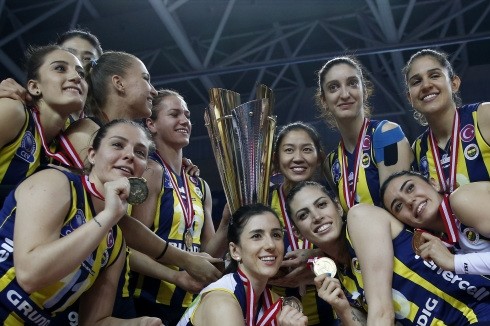 Fenerbahçe became champions of one of the strongest Women's volleyball leagues in the world - the 2016/2017 Turkish Vestel Venüs Sultanlar Ligi - yesterday after outlasting some of the strongest competition in Europe.

The fact that the 2017 CEV European Championship winners VakıfBank were only third and one of the richest clubs in the world and also record holders in number of home titles Eczacıbaşı VitrA finished fourth shows how strong the Turkish League was in 2016/2017. Against such strong competition, the win for Fenerbahçe, who took their fifth gold medal (first in two years), is sweeter than usual as they marked a stunning season with a trophy.

In the playoff finals, the second-seeded Yellow Angels swept their city rivals, Galatasaray 3-0 in the series, winning every game in straight sets. In Game 3, Fenerbahçe won 25-20, 25-18, 25-23 thanks to 19 points from Brazilian Natalia Pereira (awarded MVP of the league) and 11 from Korean Kim Yeon-Koung. Thirty-year-old Seda Aslanyürek, former member and also a Fener legend " (she wore the yellow and blue jersey from 2005 to 2014) scored 13 for Galatasaray, whose advancing to the finals was an enormous success by itself.