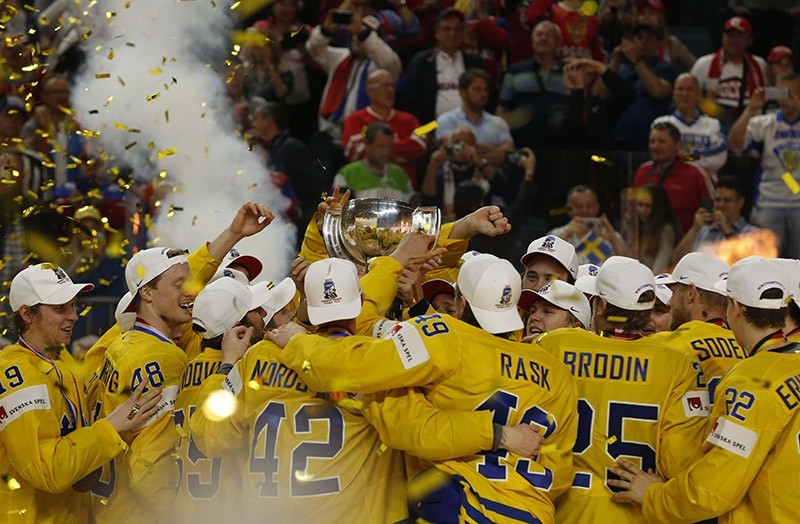 Sweden beat Canada 2-1 in a shootout in the final of the ice hockey world championship in Cologne on Sunday, securing their first title in the annual tournament since 2013.

Nicklas Backstrom and Oliver Ekman-Larsson scored shootout goals for the Swedes to prevent Canada from a three-peat.

"It was pretty nerve-wracking in the end, but we pulled it off," said Lundqvist, the New York Rangers star who made 41 saves in regulation and overtime to get it to a shootout. "What a game. It was so exciting. It's been an amazing week.

Lundqvist and Canadian counterpart Calvin Pickard, who saved tournament MVP William Nylander's first shootout attempt for Sweden, were outstanding in a game in which the Canadians narrowly outshot their opponents 43-42.

"This is how close it should be when you get to the final game," Swedish coach Rikard Gronborg said. "It's a huge win for Swedish hockey."

The respect between the sides was evident from the off as defenses held firm in the opening two periods.

The breakthrough came against the odds, with Backstrom penalized for slashing, when Victor Hedman scored short-handed with 20.8 seconds left in the second period.

It was a strange goal from distance as the defenseman just lifted the puck and it somehow bounced in through Pickard's legs. The presence of Joel Lundqvist, Henrik's twin brother, may have distracted the Canadian goaltender.

"It was a fluke goal," Swedish forward Marcus Kruger said.

O'Reilly tied it in the third period on a rebound after an initial shot from Mitch Marner.

It was tense, and fans were left gasping as the action swung from end to end. Lundqvist said he hoped fans enjoyed now neither team sat back in the third period or overtime.

Nate MacKinnon missed a good chance to clinch the win for Canada on a power play before overtime, when both goaltenders maintained their exceptional form.

"I want to congratulate Sweden. They were an exceptional team, it was a lot of fun to play them," Canadian coach Jon Cooper said. "If we were going to lose to somebody, I'm glad those guys won."

The result means Canada misses out on being the first team to win three titles in a row, since the Czechs accomplished the feat between 1999 and 2001.