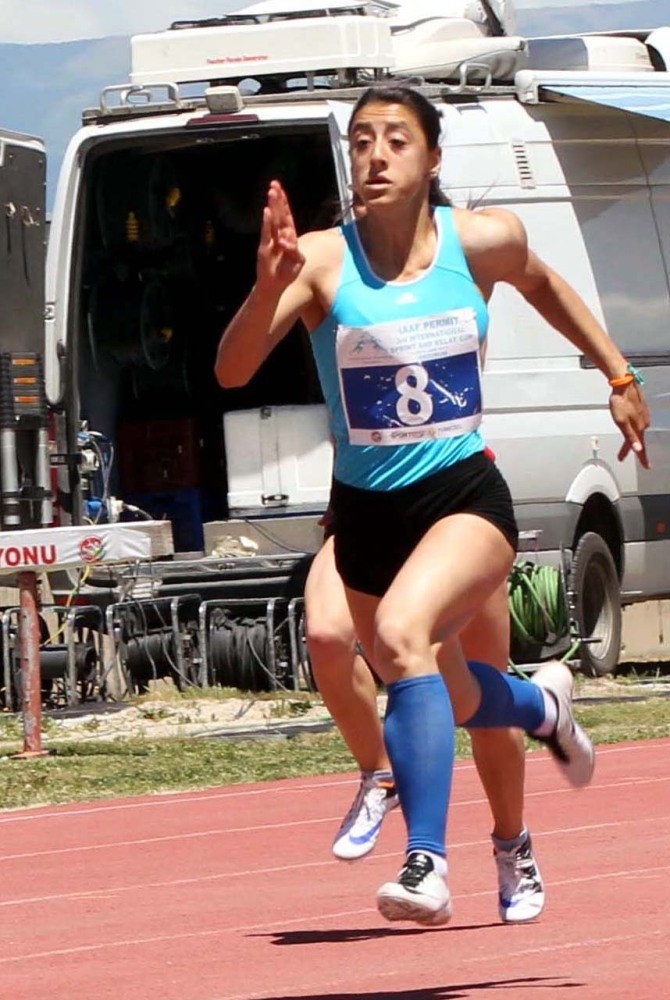 In just two years after turning professional, the 17-year-old athlete has already broken 27 national records as she aims to reach even higher
by Daily Sabah Jun 21, 2017 12:00 am

Scouted at the age of just seven, Turkish junior athlete Mizgin Ay has broken 27 national records in just two years and said she was aiming to become the female Usain Bolt

Mizgin Ay's story began 10 years ago when she was picked by coach Muhsin Soysal at a tryout for junior athletes at the Beypazarı Anatolian High School in the capital after she along with her parents, who were seasonal workers originally from southeastern Turkey's Batman, settled in Ankara.

Now, in just two years after turning professional, the 17-year-old athlete has already broken 27 national records as she aims to reach even higher, according to an interview with Anadolu Agency.

"I want to be the female Usain Bolt. I have been a professional athlete for just two years and competing for Fenerbahçe sports club. My idol is the famous Dutch female athlete Dafne Schippers. I like her physique as an athlete. I want to reach the heights like her. She is a white athlete, but she can compete neck and neck with African athletes. I want to compete in the Olympics and win medals like her."

Talking about Usain Bolt, Ay said, "I admire him. I believe that I can meet him one day. If I become a very good athlete, I will be able to meet him. In the beginning of my career, no one knew me. But even then, I outdid my rivals. They called me 'Turkey's Usain Bolt.' I love this nickname and they still call me that. I really want to be the female Usain Bolt. They also call me the records monster. I will do my best."

"I've had a lot of successes in 100, 200, 4x100 and 4x400-meter events. I have 12 national records to my name at the moment. But, in two years I have broken more than 27 records. Every year I will develop these records and break even more," she said The young athlete said that she used to play football before she got into athletics and became famous after her successes.

"I made a name for myself in the short distance races and I am aware that everyone expects me to get international medals. The World Junior Athletics Championship will be held on July 12. I'm aiming to be ranked in the first three spots there. Later, there will be the European Junior Athletics Championship. I believe that I can advance to the final and win a medal there, too. I will be competing against those who are two years senior to me in European Athletics Championship. My next aim is to compete in the 2020 Tokyo Olympics. I want to run in the finals. As a Turkish athlete, I believe that I can make it happen.

"Discipline and a proper diet both are very vital for my career. Fenerbahçe sports club, Beypazarı District Governorship and my family have been supporting me throughout," she added.

Meanwhile, Mizgin's coach Muhsin Soysal said, "In the sprint category, Turkey is having difficulties in raising good athletes. Mizgin is a natural-born sprinter. To become a sprinter one must have natural abilities. She was going to agricultural fields instead of training due to her family's financial difficulties when she was 10.

"But by the time she was 15 she became an incredible athlete and participated in races held in Turkey. We are expecting her to advance to the finals at the World Junior Athletics Championship this year. No Turkish athlete has ever made it to the finals. I think she can win a medal. But, our main goal is to compete in the 2020 Tokyo Olympics. I believe she can run under 11 seconds in the 100-meter event," Soysal concluded.