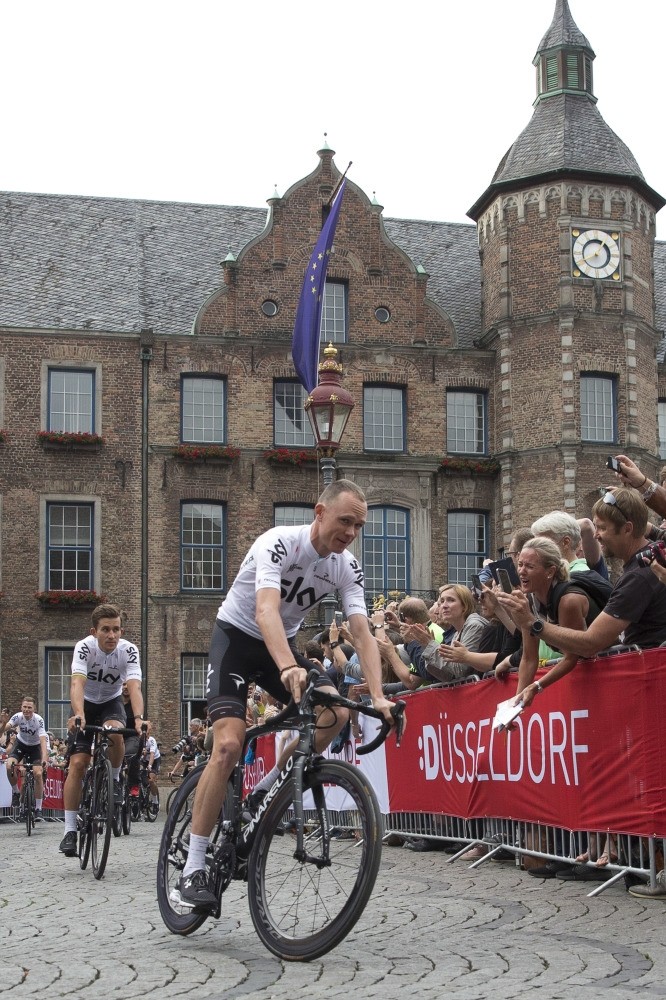 Britainu2019s Chris Froome rides during the team presentation of the Tour de France cycling race in the center of Duesseldorf, Germany.
by Compiled from Wire Services Jul 01, 2017 12:00 am

With 3,540 km of racing still left, starting with the 14-km time-trial around Dusseldorf, much will happen before the Grand Boucle arrives in Paris on July 23. Tour de France favorites Chris Froome and Richie Porte believe this year's race will keep fans enthralled right to the end

Chris Froome may look far from his best and might say this year's route does him no favors, but the Briton is the overwhelming favorite to win his fourth Tour de France crown next month. His main rivals - an aging Alberto Contador, a too-cautious Nairo Quintana and an unreliable Richie Porte - all seem short of the combination of ingredients needed to unsettle Froome's Team Sky machine, and Romain Bardet looks a little green to become France's first Tour champion since 1985. The route will suit the most aggressive riders.

Only four mountain-top finishes mean the peloton's opportunists will look to launch long-range attacks and cause chaos - of the kind that Contador used to eliminate Froome in the 2016 Vuelta. Team Sky's conservative approach to the race might expose the Briton, who has not won a race this season and was bested by Porte in the time trial and the mountains during this month's Criterium du Dauphine.

"Richie has been amazing this season. I think this year's Tour suits Richie really well," Froome told Reuters. Porte was Froome's lieutenant at Sky from 2012-15 before leaving for American outfit BMC to become a team leader. The Australian, however, has a tendency to suffer bad days that can quickly become liabilities in the grand tours. Froome might wait for the punishing stage ending up the Col d'Izoard at 2,360 meters above sea level in the final week to kill off the opposition. But he showed last year that he was able to take the initiative by attacking in descents and on the flat.

Two early summit finishes suggest Froome's rivals will be on the offensive early on. The opening block of this year's race will end with a grueling mountain stage in the Alps with three out-of-category ascents climbed between Nantua and Chambery. Contador, 34, will be the man to watch here. Having skipped the Giro d'Italia this season, the Spaniard has put all his eggs in the Tour basket. He has not won the Tour since 2009 and his attacks are not as sharp as they used to be, but Contador remains one of the three opponents Froome will be most wary of.

"My biggest threats come from guys who did not do the Giro - Richie Porte, Alberto Contador and Romain Bardet," said Froome. Quintana, runner-up to the Briton in 2013 and 2015, does not rate a mention, having finished a disappointing second in the Giro. The Colombian, who will ride in tandem with the in-form Alejandro Valverde of Spain, has tended to slip too easily into the role of play second fiddle to Froome, looking content to settle for a podium finish.

"I would love to see Quintana win but he lacks the ability to attack," three-time Tour champion Greg LeMond said.

Other contenders include Italian Fabio Aru, Dane Jakob Fuglsang and Ireland's Dan Martin. But should Froome be spared the repeatedly denied allegations of doping that clouded his 2013 and 2015 rides, he could end up enjoying a relatively smooth passage to Paris.

In the points classification, world champion Peter Sagan is expected to pick up a sixth straight green jersey, while France's Thibaut Pinot will target the king of the mountains' polka dot jersey.

Sprinters will have several chances to shine and Briton Mark Cavendish, recently recovered from the Epstein-Barr virus that causes glandular fever, will hope to add to his 30 Tour stage wins as he looks to close in on Tour legend Eddy Merckx's all-time record of 34. The race starts in Germany on July 1 with a 14km time trial in Duesseldorf, where local rider Tony Martin will be one of the favorites to claim the first yellow jersey. That would serve as a powerful symbol in a country that has shunned the race for many years in the wake of doping scandals and only resumed televising it in 2015.