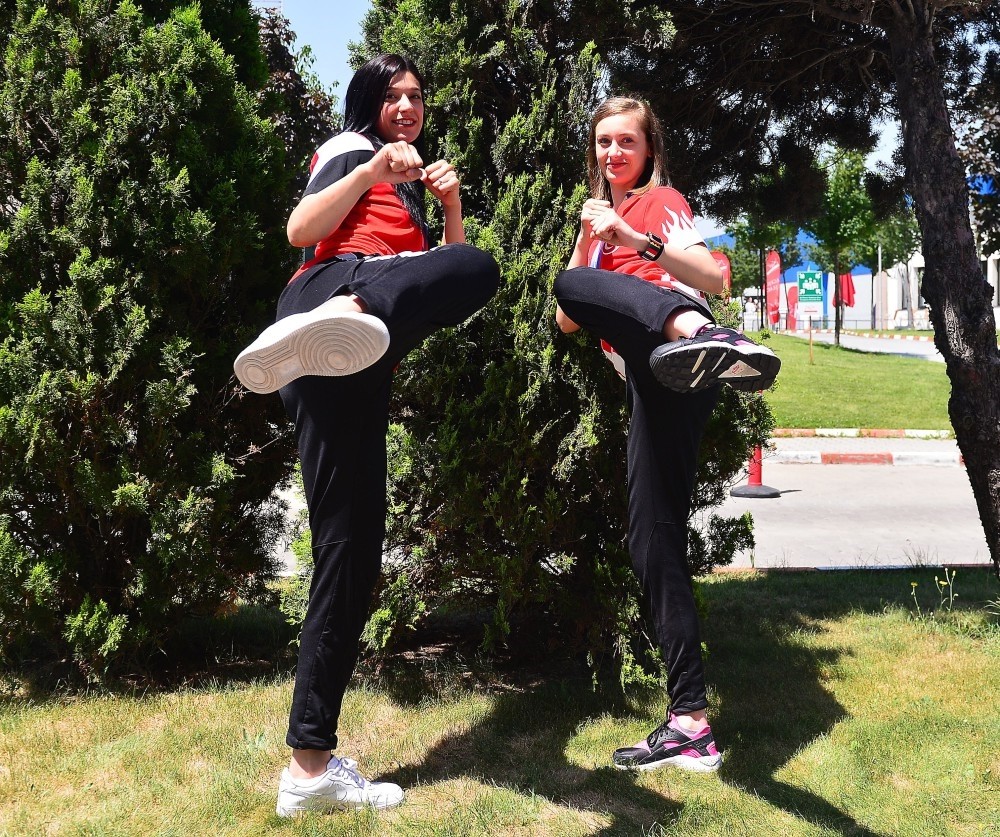 While Youth and Sports Minister Kılıç applauded the Turkish athletes who have so far won 345 medals in different competitions this year, world taekwondo champions Nur Tatar Askari and Zeliha Ağrıs are now eyeing the ultimate success at the 2020 Summer Olympics in Tokyo

After winning gold medals at the 2017 World Taekwondo Championships, Nur Tatar Askari and Zeliha Ağrıs are now eyeing ultimate success at the 2020 Summer Olympics in Tokyo. A grateful Askari couldn't hold back her enthusiasm and desire to win at a recent press conference. The young gold medalist said that her heart is set on gold, declaring that it is the only medal she wants to win at the 2020 Tokyo Olympics.

"Turkey has been through some tough times, but we have stayed united. We, as athletes, also stayed united competing abroad," Askari said.

Ağrıs, Turkey's other female gold medalist, said she was also looking ahead to the Tokyo Games after defeating a tough opponent in this tournament. Her target, she said, was winning an Olympic gold not only for herself but for the whole nation.

"My biggest rival was the Egyptian Radwa Abdelkader. We had a very tough fight. The semifinal and final were hard too. I had lost twice to my Russian rival before, but this time I got my revenge. Now, my new target is to become world champion in 2019 World Taekwondo Championship and to compete in the 2020 Tokyo Olympics and represent my country there as best as I can. Nur Tatar Askari is my idol," she said.

Meanwhile, the team's head coach, Ali Şahin, weighed in on the recent success Turkey has enjoyed, saying, "In every tournament, we have made progress as a team. But, to qualify for the Olympics is harder than becoming an Olympic champion. We face different athletes with different physiques in the qualifying stages. It is very challenging to overcome this period."

Turkey Taekwondo Federation Chairman Metin Şahin also congratulated the athletes on their success, while he also thanked the president for his contributions.

Additionally, Youth and Sports Minister Akif Çağatay Kılıç also applauded the Turkish athletes who have so far won 345 medals in different competitions this year. In a recent TV interview, Kılıç said, "Turkish athletes from several branches have performed outstandingly since the beginning of 2017. We have won 125 gold, 106 silver, and 114 bronze medals. Our men's wheelchair basketball team have become European champions. We will keep up the good work in a well-planned planned manner. We have been giving importance to physical education. We have also been scouting for talented athletes across Turkey, mostly fourth and fifth graders, in cooperation with our Ministry of National Education. In addition, our Summer Sports Schools are also operating in all our provinces in 52 different branches of sports."

On a slightly different note, Kılıç also reminded that preparations for the 2017 Deaflympics, which will be held in Samsun between July 18 and July 30, were almost complete.

"We are in the final stages of our preparations. The facilities are almost ready for the event. We are making some final arrangements. This is one of the biggest sports events in the world. Some 96 countries, the highest in the games' history, will compete here," he said.