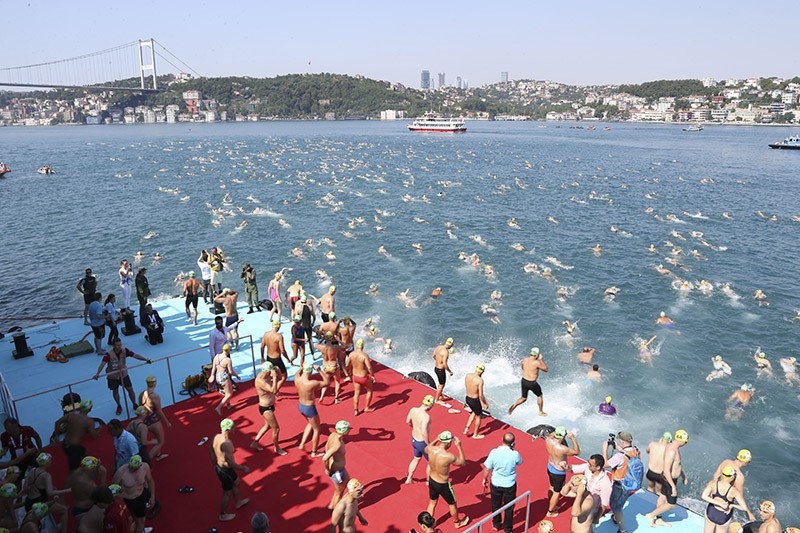 This year's competition, which attracted more than 2,300 swimmers from 49 countries, took place as part of TNOC's campaign "Sports for everyone."

The Bosporus was closed in the morning for maritime traffic for four hours due to the competition.

The race kicked off at 10 a.m. at the Kanlıca pier in Beykoz district on Istanbul's Asian side. It was held under the supervision of coastal safety boats on a course of approximately 6,5 kilometers (4 miles) extending to Kuruçeşme in Beşiktaş district on the European side.

Russian swimmers took first places in both men's and women's races this year.

Evgeniy Elisev managed to complete the cross-continental race in 50 minutes 58 seconds, while his countrywoman Kristina Kochetkova reached the finish line in 54 minutes 57 seconds.

The Bosporus Cross-Continental Races, has been organized annually by the TNOC since 1989 and is the single swimming race from one continent to another, from Asia to Europe, in the world.

The Samsung Bosporus Cross-continental Swimming Race is organized under the auspices of the International Olympic Committee with much social and corporate support. Thanks to increasing interest year after year, this adventure, which began with the participation of four female and 64 male athletes in 1989, has grown to become an important part of the Turkish sports tradition.

To ensure the safety of its competitors, the Bosporus Commission of the National Olympic Committee of Turkey limits the number of competitors to 1,550 people, and all spots were taken by registered competitors. Of these, 1,426 took part in the race. The names of those who will race are decided by selection in Istanbul, Ankara, Adana and İzmir. In addition to normal swimming safety rules, the difficulty of the course calls for additional safety rules and protocols. These rules and protocols are explained to competitors in information meetings before the race, and boats accompany the swimmers along the course.