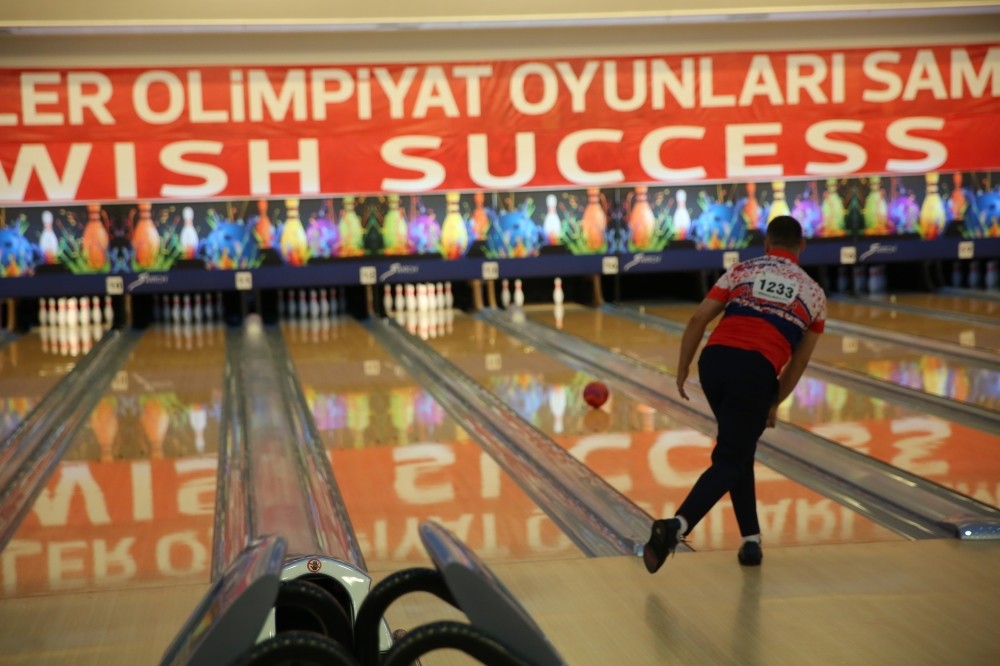 In menu2019s categories, Li Hsiao Chang of Taiwan won gold medal after he beat his Russian rival Vladimir Grigoryev.
by Daily Sabah with AA Jul 25, 2017 12:00 am

Turkey, in the Samsun 2017 Deaflympics, have not made the podium yet in the single men and single women categories in bowling. The national athletes are trying to change this in the coming days in the pairs, triplets, teams and masters

Zeynep Canpolat and Şükriye Mutlusoy, Turkey's youngest bowling duo at this year's Deaflympics, is dreaming big for the future. Though team Turkey could not win a medal in the men's or women's singles, the national athletes are looking to change that over the coming days in the pairs, triplets, teams and masters events. And even if the team cannot ultimately win a medal, they will leave the tournament with valuable experience that might become the key to success for upcoming stars Zeynep Canpolat, and Şükriye Mutlusoy.

Zeynep Canpolat, 17, said: "We want to take the first place for Turkey. To be strong and wave our country's flag. I want to make my family proud. I had a great experience taking part in this event. I can never think of leaving the sport."

Şükriye Mutlusoy, 19, said: "We wish to become successful this year when we're hosting the event. I want to wave our flag by claiming the first place in the world and in Turkey over the years."

Team coach Recep Çınar said that they picked the young names from among the talented athletes at the Turkish championship.

"At the end of four different camps, we identified six talented young players. Zeynep and Şükriye are two of them. There are three more in men's and one in women's categories. They are already playing in the Turkish leagues. I have also met with the Bowling Federation. Hopefully together, we will work to not lose our young generation of athletes, and prepare them even better for the next Olympics."Meanwhile, 117 athletes from 30 countries competed in the first day of the bowling games in Samun Deaflympics. In men's categories, Li Hsiao Chang of Taiwan won gold medal after he beat his Russian rival Vladimir Grigoryev. Davide Sacchi of Italy and Youngwook Yeo of South Korea won bronze medal.

Elsewhere, in an exclusive interview with Anadolu Agency (AA), Hasan Dikyuva, a member of the Deaflympics Committee, emphasized the importance of deaf culture among people with hearing disabilities. "We are all equal and we have convinced the people of Samsun to believe it," he said.

Dikyuva, who is also an expert at the Turkish National Sports Federation for the Deaf, described deaf culture as a "silent environment" that can thrive when it is cultivated. As part of preparations for the Samsun games, 5,000 workers and volunteers were given sign language instruction to help welcome deaf athletes.

Preparing for the biggest event ever held for the deaf community, the Deaflympics in Samsun is the result of a difficult and time-consuming process. Dikyuva described the results in the technical scope of the event as "world class."

Turkey spent TL 450 million ($127 million) to construct 42 facilities in various districts of the province where athletes will compete in 21 categories, including basketball, football, swimming and wrestling.