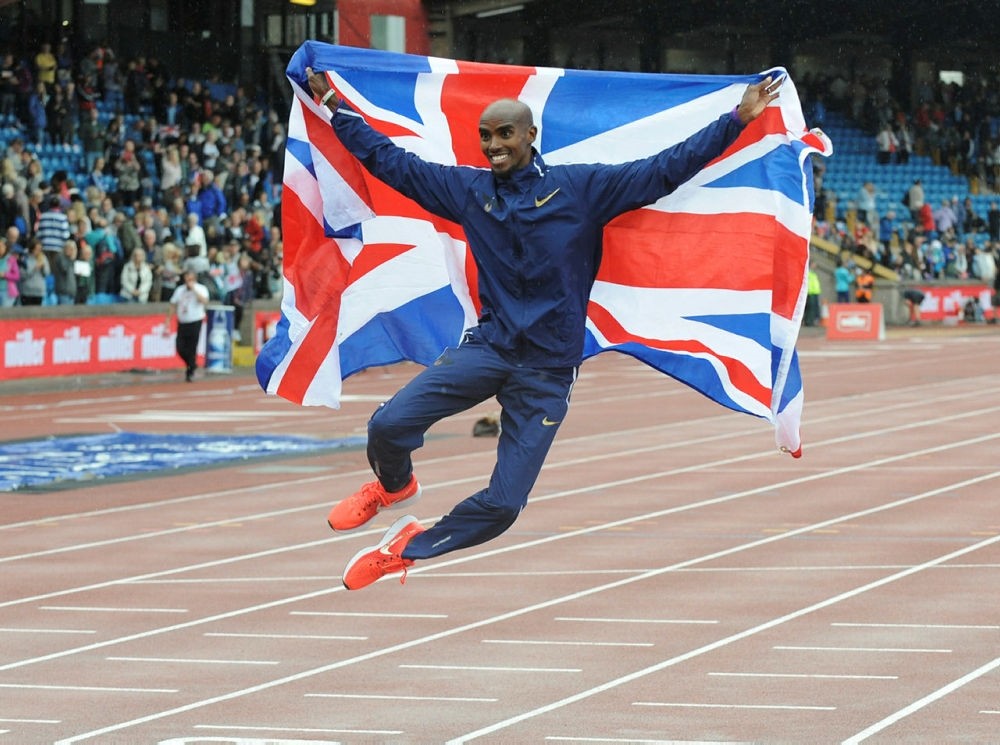 British athletics legend Mo Farah began the day taking a lap of honor in an open top Bentley and ended it by giving the crowd what they wanted in his final race on home turf -- a victory.

The 34-year-old, who had agonizingly fallen just short of a third successive distance world double in London last Saturday taking silver in the 5,000 meters, cruised home in the 3,000m at the Birmingham Diamond League meeting.

Despite his presence the meeting was not a sellout.

For a final time in Britain -- he runs in Zurich on Wednesday before embarking on a road running career -- Farah knelt to the ground and kissed the track before adorning himself bare-chested with the Union Jack flag.

"It's been an amazing week," said Farah. "I have been tired but had a little downtime with family.

"Emotion was high, not as high as London but it was the last time at home.

"While I was racing I was just trying to think about race and who was there.

"It means everything to me to be four times Olympic champion (2012/16 doubles) it is all I dreamt of as a youngster was running for Britain," added Farah, who came to Britain aged eight with his mother and two of his brothers form war-torn Somalia.

"A hobby has become a job which is what you want. Going to the road will be a new game and a new mindset, I am excited."

Jamaica's double Olympic individual sprint champion Elaine Thompson put behind her a disappointing performance in the 100m world final to win the event in 10.93sec.

"It was important to pick myself up and come back," she said.

There was to be frustration for Adam Gemili in the men's 100m -- an all British affair -- as the man credited with running the decisive leg in their epic 4x100m relay world victory was disqualified for a false start.

"It's the first time that has happened to me in my career. I feel like I have let so many people down," he said.

"It's not the world championships but I would still like to apologise."

CJ Ujah -- another member of the victorious 4x100m quartet -- won the race, for his fourth victory of the season on the circuit.

American star Aries Merritt bounced back from his fifth place in the 110m hurdles world final -- though he said it felt like a victory having had a kidney transplant just two years ago -- to win the event on Sunday.

The 31-year-old held off the late charge of world silver medallist Sergey Shubenkov in a race that featured six of the world finalists -- though two were disqualified for false starts including Frenchman Garfield Darrien.

"I wouldn't call it good," said Merritt. "I would say a lot of us are very tired from the championships. These gentlemen are world class so it is always good to get a win against them."

Qatar's Mutaz Essa Barshim produced a great jump of 2.40 metres for the world's leading mark of the year and the newly-crowned world champion took the bar as a bonus.

"I am really happy with this height," grinned Barshim. "I am pushing for the world record and really want it.

"I'm taking that bar home. I am going to store it somewhere and no one else is going to have it."