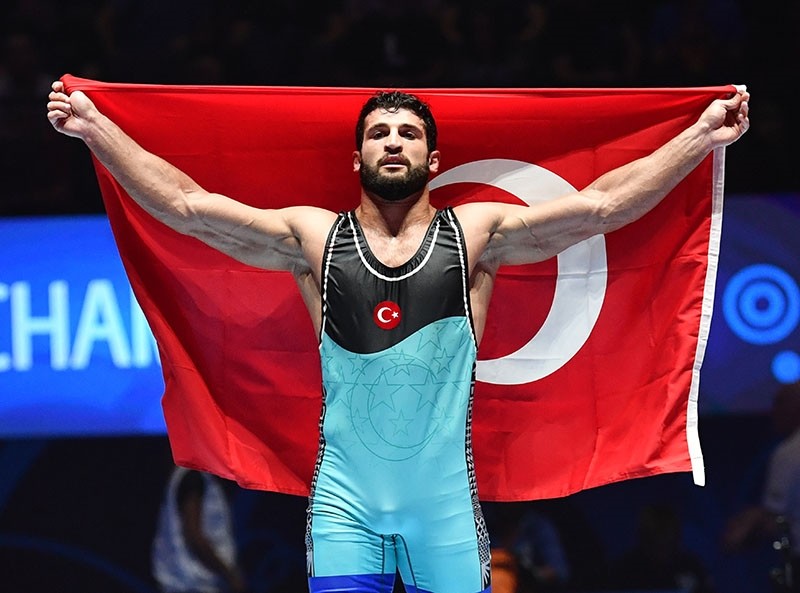 Başar beat Kudla 2-1 on the first day of the games, picking up his first world championship title. Last May, Başar came close to winning the European title but had to settle for a silver medal after losing 3-2 to Hungary's Viktor Lorincz in the European Wrestling Championship in Serbia.

Congratulating the young wrestler, Sports Minister Aşkın Bak said: "I wish him continued success. He has held our flag high in the international arena."

What makes Başar's title particularly important is the fact that until now Turkey have had limited success in Greco-Roman wrestling compared to freestyle.

After the win, Başar said: "My coaches believed in me and I believed in myself. Thank God, I won the title. We attended many camps before coming here. My coaches helped me a lot. I hope my fellow Turkish wrestlers will also win medals."

"My first target is now to claim gold in the 2020 Tokyo Olympics. I want to overcome my problems and win the Olympic title."

About his phone call with President Erdoğan, Başar said: "I am very happy to give the good news to our President. I am waiting for the 2020 Olympics. I told him I will bring the Olympic gold."

"Our President always supports sports and athletes. I want to thank him. With his support, Turkey will many more medals," he said.

He pointed out the recent political row between the two countries and said: "We are very proud of Metehan Başar. What makes us happier is that he beat a German rival. That was a good lesson for the Germans."

This has been a bright year for Turkish wrestling. Turkey won five gold, one silver and three bronze medals at the recent 2017 European Wrestling Championships in Serbia, marking the country's second biggest achievement in the sport since 1949.

Previously in 2007, Başar won a silver in the 85-kilogram event at the 2007 Black Sea Games in Trabzon, Turkey. And claimed a bronze at the 2015 European Games held in Baku, Azerbaijan.

In the European competition, Turkey ranked 3rd as a team in the freestyle category, 4th in Greco-Roman category and 8th in women's wrestling. Back in 1949 European Wrestling Championships in Istanbul Turkey had claimed with six gold, one silver, and one bronze.