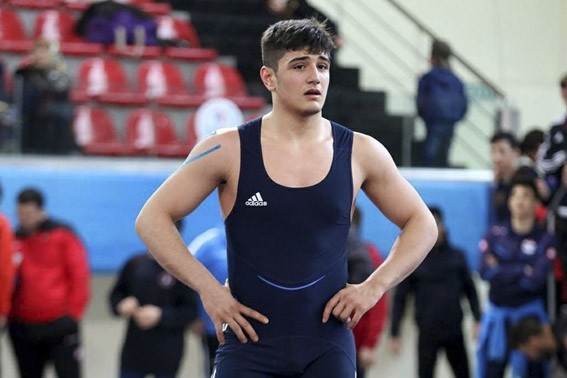 Turkish junior Greco-Roman wrestler Muhammed Furkan Dursun (17) won gold at the Cadet World Championships in Athens by beating Russia's Muhammed Evloev in the 85-kilogram category final Wednesday. Dursun beat Evloev 5-3 picking up the world championship title. After three strong days of competition at the Cadet World Championships, the Greco-Roman champions have all been anointed, with Russia reclaiming the team title it lost in 2016 with one individual champion and six total medals.

The battle for second place was a three-horse race between Iran, Ukraine and Georgia, who all finished with five medal recipients. In the end, only two points separated these three nations, and each had critical matchups in dramatic medal round. Iran nudged itself into a second-place finish behind the gold-medal effort from Mehran Seyed Jafar Saadatifard at 76kg. Saadatifard, a silver medal winner at the Cadet Asian Championships, escaped with a tight 2-0 win over Cadet European bronze medalist Istvan Takacs in the finals. Third place Ukraine managed three medals, including championship performances from Vladyslav Kuzko at 46kg and Vladyslav Kravchenko at 69kg. Kuzko claimed his gold medal with a 3-0 decision over Azerbaijani Nihat Mammadli.

Kravchenko won by a slim1-1 margin over Cadet Indian bronze medalist Ashu Ashu in a match that was decided by passivity points. Gurban Gurbanov of Azerbaijan played spoiler to Ukraine's hopes of a finals sweep as he came from behind to defeat Hennadii Zavertailo in a thrilling 42kg final. Zavertailo led 4-1 in the second period following textbook execution of an arm throw. Gurbanov retaliated with two such throws of his own, including the match winner with four seconds remaining, to get the win, 5-4. Georgia wound up in fourth place after adding bronze medals from Temur Khozrevanidze at 46kg, Davit Sologashvili at 69kg and Giorgi Tsopurashvili at 76kg.