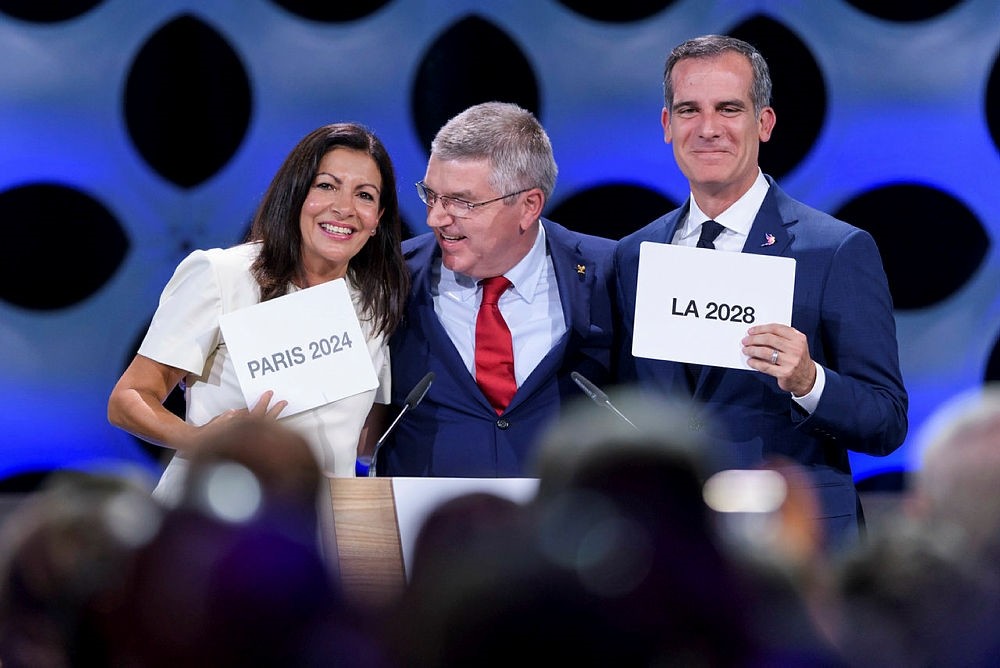 Paris and Los Angeles celebrated their coronation as host cities for the 2024 and 2028 Olympics here Wednesday, delivering a jolt of good news for the International Olympic Committee as it battles escalating corruption allegations.

In a drama-free conclusion to a three-year bidding race, IOC members voted unanimously to rubber-stamp a deal hashed out in July for Paris to be given 2024 and Los Angeles 2028.

The pre-ordained outcome did little to dampen celebrations inside the Lima Convention Centre, where Paris and Los Angeles officials cheered and congratulated each other.

IOC President Thomas Bach -- a driving force behind the decision to confirm 2024 and 2028 at the same time -- hailed the joint award as a "win-win-win."

IOC chief Bach meanwhile said the Olympic movement had secured the result "we were looking for."

"I couldn't be more happy than I am right now," Bach said. "We have the two best possible games for the Olympics in 2024 and 2028, in two great Olympic countries."

The vote marked the final act of a campaign that had been stripped of the usual intrigue ever since Paris and Los Angeles agreed to carve up 2024 and 2028 following encouragement from the IOC.

The 2024 Games will mark the third time Paris has staged the Olympics, coming exactly 100 years after they last hosted the Games. Since then, France had made three unsuccessful bids for the Olympics.

"It's a great feeling of happiness to be bringing the Games back to Paris after 100 years," Paris mayor Anne Hidalgo said.

In Paris, giant Olympic rings were unveiled in front of the Eiffel Tower just after the announcement was made as a small crowd celebrated in driving rain.

The 2028 Olympics will be the first held in the United States since the chaotic 1996 Games in Atlanta.

It will also mark the third time that Los Angeles has hosted the Olympics following successful editions in 1932 and 1984.

Paris and Los Angeles emerged from the initial bidding race for the 2024 Games after a number of cities withdrew citing waning public support and concerns over budget.

Hamburg, Rome, Budapest and Boston all fell by the wayside during the competition, reflecting the political difficulties in persuading voters that staging the Olympics is worth the multi-billion-dollar price tag.

IOC chief Bach first signaled publicly that the double-award of an Olympics could be on the agenda in December last year, lamenting that the bidding process produced "too many losers".

As the tussle for 2024 unfolded, and as the field thinned to leave just Los Angeles and Paris, the IOC's determination to secure two high-quality bids for the next two summer games became apparent.

In July, the IOC announced it would award the staging rights for the 2024 and 2028 Olympics at the same meeting in Lima, laying the way for a swift agreement between the two over the running order.

'We cracked the code'

"We cracked the code when the IOC changed the formula," Los Angeles Mayor Garcetti told AFP.

"We've talked to a lot of folks who said it used to be about one corner of the room celebrating and the rest crying...I think we showed that dreams can come true."

The smooth finish to the race also eliminates the risk of the vote being tainted by the sort of scandal that has embroiled the ballot for the 2016 Olympics.

The IOC was left tackling a fresh wave of graft allegations last week when investigators in Brazil swooped on the country's Olympics chief Carlos Nuzman.

Nuzman stands accused of plotting to bribe IOC members into awarding Rio de Janeiro the 2016 Games at a 2009 vote in Copenhagen.

The allegations swirling around Rio's bid revived memories of the Salt Lake City bribery scandal, which led to 20 IOC members being either kicked out of the Olympics' ruling body or pleading guilty to accepting bribes for votes.

French investigators meanwhile have already announced they are investigating the 2013 vote in Buenos Aires which awarded the 2020 Olympics to Tokyo, following reports of secret payments into a Singapore-based bank account linked to the son of disgraced former world athletics chief Lamine Diack.

IOC official Dick Pound, who has been critical of Bach's handling of recent corruption and doping scandals, believes the movement can however have reason to celebrate after Wednesday's joint award.

"You've got Paris and Los Angeles locked in for the next two games, on top of Tokyo," Pound said.

"So that's three first-class host cities in a row. That's an excellent outcome."