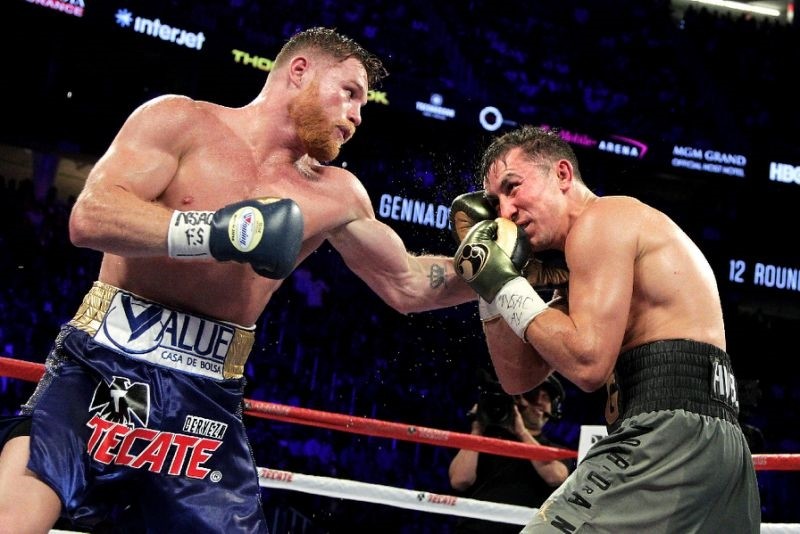 Canelo Alvarez (L) connects with a left hook against Gennady Golovkin (R) during their WBC, WBA and IBF middleweight championship fight on September 16, 2017 in Las Vegas. (AFP Photo)
by Sep 17, 2017 12:00 am
Three-belt champ Gennady Golovkin and Canelo Alvarez look set to rule the resurgent middleweight division for years to come after their 12-round slugfest Saturday which fittingly ended in a stalemate.

"It was a great fight," said boxing promoter Oscar De La Hoya. "This is one of the best fights we have seen in recent years."

Golovkin, who was making his Las Vegas debut, and Mexico's biggest star Alvarez delivered on all levels as two of boxing's pound-for-pound best met at the T-Mobile Arena Saturday in a highly-anticipated fight that was two years in the making.

"We knew going into this it would be a war," said Golovkin's trainer Abel Sanchez.

Golovkin will earn a $3 million purse and Alvarez will make $5 million.

Golovkin is considered one of the fittest athletes in boxing and he needed every ounce of that conditioning and every extra breath of air to withstand the force of Alvarez's body and head punches.

Alvarez says he would use his rematch clause for a second fight against knockout king Golovkin, who has now gone the distance his last two fights. In March, he had his streak of 23 consecutive knockouts snapped when he outpointed Daniel Jacobs.

Some said Golovkin was showing his age as Jacobs had an unexpected surge over the final three rounds before losing by a narrow decision.

Alvarez doesn't think Golovkin is ripe for the picking but says he might have lost some of the fear factor.

"He has a different power than others I have faced," Alvarez said of Golovkin. "But he is not the monster everybody is talking about. I didn't feel that."

Golovkin waited a long time to get his first fight on boxing's biggest stage in the United States. He has fought in 22 cities and seven different countries but never before in Sin City.

This fight should have already happened and Golovkin had to push hard to get a deal. But it was left to marinate until there was no other option for Alvarez, who was fighting for just the second time over 155-pounds.

Golovkin wasn't going to let anything distract him while training for this fight. He even missed the birth of his daughter on September 8 because he was in the gym training for the fight. His wife, Alina, gave birth to the couple's second child.

While Golovkin plans to enjoy more time with his expanding family, Alvarez is going to take several months off.

"I am going to rest for the rest of the year and we will fight again next year," he said.