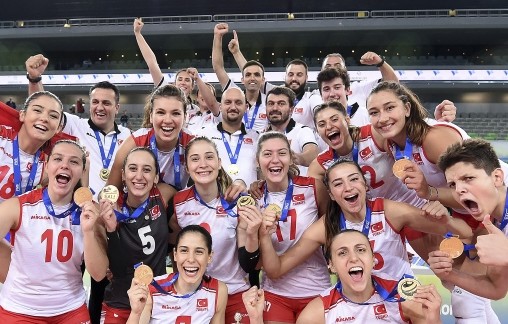 Turkey have won their first FIVB World U23 Women's Volleyball Championship title after they put on a brilliant show to shut out hosts Slovenia 4-0 in the final. Turkey's Hande Baladın was named the most valuable player of the tournament

The Turkish U23 women's volleyball team brushed aside hosts Slovenia 4-0 to clinch the FIVB World U23 Women's Volleyball title Sunday at Arena Stozice. The girls delivered a brilliant performance in the final as they pounded their rivals from the service line to deny the hosts any kind of play and sailed to a 4-0 (15-12, 15-11, 15-13, 15-8) sweep. All matches in Ljubljana were played under a new scoring system currently being tested: a best-of-seven, 15-point set format. Turkey, who improved on their previous best of silver in the 2015 edition at home in Ankara, created all sorts of problems to Slovenia's reception above and beyond their nine direct aces (to Slovenia's none). This helped the block immensely to provide a total of eleven stuffs compared to Slovenia's five. For the winners, Ebrar Karakurt was practically unstoppable at 60 percent (12/20) in attack and the blocking duo of Beyza Arıcı and Aslı Kalaç brought in three stuffs each.

It was Slovenia's first defeat in the tournament. Turkey, on the other hand, had lost in pool play to Brazil but still managed to top their pool. Slovenia tried to react in the third set, taking an early lead, but Turkey eventually caught up at 12-12 and were first to reach set point at 14-13 on a kill from the middle by Aslı Kalaç that left libero Maja Pahor gasping for air. A double block by Hande Baladın and Saliha Şahin on Iza Mlakar finished it off in the very next rally. Failing to find a way to counter Turkey, Slovenia collapsed in the fourth as the Balkan side cruised to overall victory. Hande Baladın headlined the Dream Team for the 2017 FIVB Women's U23 World Championship after guiding her team to glory. Baladın was named the most valuable player (MVP) and one of the two Best Outside Hitters of the tournament. She totaled 91 points during the course of the seven matches to earn Turkey's first ever U23 world championship gold medal.

"I am overwhelmed with joy, I can't believe it," said Baladın after the match.

"I am proud of myself and proud of my team. It is the first time in my career I have received such an important award. During the semifinals and the gold medal clash, I felt so much pressure on my shoulders. However, I gave my best throughout the tournament. That's what counts in the end," she said.

Along with Baladın, teammate Beyza Arıcı was selected as one of the two Best Middle Blockers.

Turkey coach Ataman Güneyligil said: "We played the final like a final should be played except for rotations where we made some mistakes. We understood our rivals immediately and found the solutions. And then we went ahead with our game. I can't put my feelings into words, I am so happy. I would like to thank my players and the federation. I am so happy!"

Turkey captain Çağla Akın said: "We played with a lot of patience and waited for the opponent to make mistakes. I have said before that Turkey were back. We proved it in the middle today. I am really proud of my team, the coaches, and staff. Thank you so much for making our dreams come true."

Slovenia coach Alessandro Chiappini said: "The biggest problem today was that we left the Turks to play their game. We couldn't put any pressure on them and they started to play better and better. We just couldn't fight our way back into the match. I am still very proud of my girls. This is a great result and it's will be an important step for this team, towards the senior category. If my players can sustain this spirit, they will become a great team."