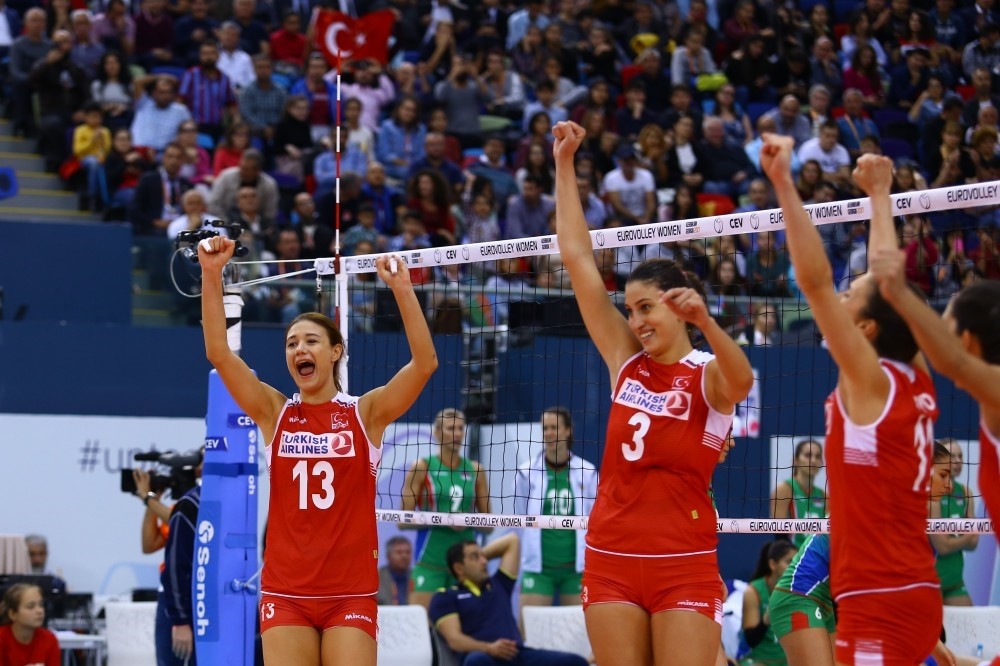 Azerbaijan's dream of a historic EuroVolley medal was short lived. The hosts got off to promising start in their bronze medal match with Turkey, but they could not keep that same pace for long and their opponents eventually stormed to a 3-1 victory (22-25, 25-21, 25-14, 25-8) at the National Gymnastics Arena for the second day in a row.

As a result, Turkey celebrated their third European Championship medal in history - to go with the silver and bronze they won in 2003 and 2011, respectively. This is quite an achievement for a team that had such a rough start to the tournament. Azerbaijan, on the other hand, have to be content with fourth place, thus equaling their results from the 2005 edition of the tournament and what they achieved at the European Games two years ago.

The match started at a relatively slow pace with either side able to break away until Azerbaijan finally did so shortly after the second technical time-out (19-16) with the help of their star player Polina Rahimova. Turkey responded swiftly (20-19) but Azerbaijan did not tremble and resumed their march towards a 25-22 win.

Turkey rushed to a 6-2 lead in the early stages of the second set before two consecutive aces by Rahimova leveled the count at 7-7. Azerbaijan eventually edged ahead 9-8 on a second attack by middle blocker Kseniya Poznyak, but Turkey were up to the challenge, as Gözde Kırdar and Neriman Özsoy set the tempo of their game and helped level the match (25-21) and stay in contention for the third European Championship medal in Turkish history.

Turkey had a rough start to the tournament last week, losing two matches in a row in their pool before pulling out a 3-1 victory over Ukraine to stay alive in the competition. They improved with every match, with the only exception being Saturday's semi-final with Serbia, and that was evident in the bronze medal game as well.

A sound overall performance produced a compelling 16-8 lead for the Turkish players coached by Giovanni Guidetti as Azerbaijan, on the other hand, made too many mistakes and even Rahimova was far less effective than earlier in the match. Azerbaijan coach Faig Garayev substituted Rahimova and a few more players from his starting six, but to no avail as Turkey comfortably cruised to a 25-14 win.

At this stage, Azerbaijan had no other option than to fight back if they wanted to fulfill their dream of a historic European Championship medal on home soil, and the audience was likely to play a role as well in an effort not to miss out on such an opportunity.

However, the players of Azerbaijan looked kind of frozen as they quickly trailed 5-0 in the fourth set, and even loud support from the stands could not help the hosts change the course of the game (8-2). Turkey was rewarded for their efforts with anything they attempted working out just fine and they produced a massive 25-8 score to seal their 3-1 victory.

Gözde Kırdar said, "Actually it was a really hard tournament for us. We played very good games and bad games; we fought a lot in some of the matches whereas in others we did not do quite the same. Yesterday it was a very bad game for us; we did not fight at all but in the end we reacted very well. This bronze medal is so important for our country, for ourselves - I am so proud of this team. This was my last game with the national team, so I am happy to finish with a medal. Thank you everyone!"

Giovanni Guidetti, head coach of Turkey, said, "I am really happy for my players - especially for some of them, for whom this was probably the last match with the national team. We started our season with the dream of winning a medal - and we grabbed the medal in the end. Therefore, this result is very important for us, for the players, for the Federation - and the Volleyball fans in Turkey as well. This is my first year with Team Turkey, so this is a very good start."