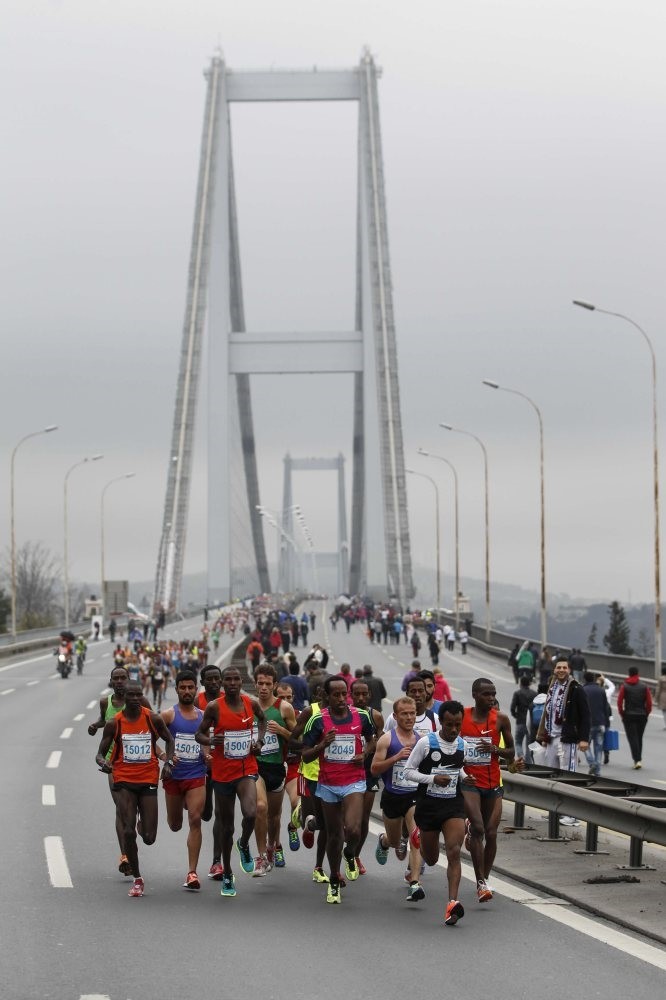 The Vodafone Istanbul Marathon, which has been held every year since 1979, is the first race that covers two continents.
by Daily Sabah Oct 07, 2017 12:00 am

The only marathon run over two continents will be held for children this year with the motto: "We are running for the future of our children," in which 73 elite athletes, 24 of whom are from Turkey, will participate

The Vodafone 39th Istanbul Marathon is going to be held on Sunday, Nov. 12 with the theme "We are running for the future of our children" under the sponsorship of Vodafone by the Istanbul Metropolitan Municipality and Sport Istanbul. Seventy-three elite athletes, 24 of whom are from Turkey, will participate in the marathon. Vodafone is sponsoring the marathon for the sixth time this year.

Istanbul Metropolitan Municipality Deputy Mayor Göksel Gümüşdağ said in a press conference held in Çırağan Palace in Istanbul: "Our biggest aim is that theVodafone Marathon will be a major athletic event such as those in New York, London, Berlin and Tokyo. It is the only course in the world where the marathon includes two continents. This year we will run for our children who are the most precious things in our lives."

Thirty-seven foreign elite athletes who will compete with each other to come first in the 42-kilometer marathon are from countries such as Kenya, Ethiopia and Namibia, which are known to be the world's strongest countries in terms of marathon running, and from some European countries such as Ukraine, Belarus and Lithuania, which have deep marathon traditions. Besides foreign athletes, 10 Turkish elite athletes will participate in the contest. The Vodafone 39th Istanbul Marathon is expected to break an attendance and racetrack record.

Among men, Paul Lonyangata from Kenya, who won his best degree with two hours, six minutes, 10 seconds in April this year, is the favorite name of the contest. The closest competitors of Lonyangata, who was born in 1992 and came first in the 2017 Paris Marathon, are Kenyan athletes Jacob Kendagor and Ezekiel Kemboi Omullo, and Ethiopian athlete Bazu Worku.

Among the women, Kenyan athlete Agnes Jeruto Barsosio is the favorite name, who came second in the Paris Marathon this year with 2 hours, 20 minutes, 59 seconds. The athlete who was born in 1982 won the Vodafone Istanbul Marathon last year. The closest competitors of Barsosio are Kenyan athlete Visiline Jepkesho and Ethiyopian athletes Letebrhan Haylay and Meseret Mengistu.

The Vodafone Istanbul Marathon, which has been held uninterruptedly since 1979 and is known as the first race to be run between continents, will be held in four different categories: The marathon (42,195 kilometers), 15-kilometer race, 10-kilometer race and public race. Thirty-thousand athletes with bib numbers are expected to participate in the marathon, which was deemed worthy of the Golden Category in 2012 by the International Association of Athletics Federations (IAAF) and is considered as one of the best 11 marathons in Europe and 22 in the world. The number of runners with bib numbers who participated in the marathon has increased fourfold since 2011 under the sponsorship of Vodafone.