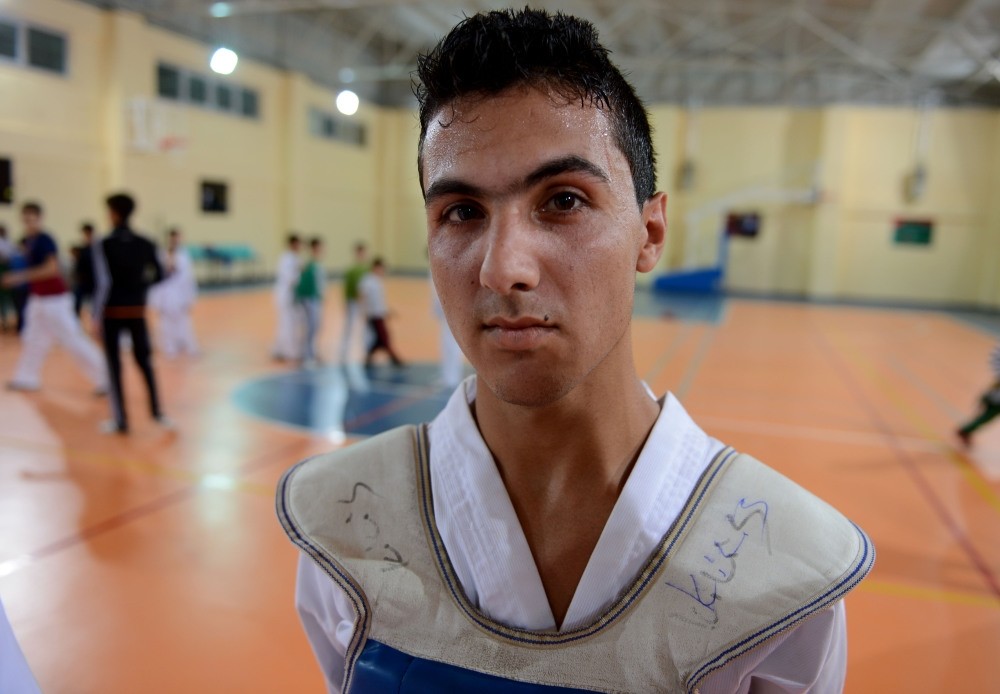 Bilal Neccar says their biggest dream is to participate in international competitions on behalf of Turkey.
by Daily Sabah Nov 03, 2017 12:00 am

After attending classes at the Kilis Öncüpınar Accommodation Facility, which were given with the cooperation of the World Taekwondo Federation (WTF) and the Turkey Taekwondo Federation, two athletes from Syria want to represent Turkey in international competitions. Exercising under the guidance of trainer Mustafa Tohumcu at the sport facility, Bilal Neccar and Hasan Abbas say their biggest dream is to participate in international competitions on behalf of Turkey, which extended them a helping hand. Neccar, 20, said he was introduced to taekwondo nearly five years ago when he first came to Turkey. The young Syrian refugee said that trainers provided them with a lot of support in every aspect every step of the way.

"I was able to forget the pains that I have gone through," he said. "I hope I will be able to attend the Turkish Open International Taekwondo Tournament, which will be held in 2018 in Antalya, for Turkey, and pay my debt back to the country by raising the Turkish flag." Abbas said that he wants to join the Turkish national team and attend competitions after becoming a Turkish citizen because of the hospitality shown toward them. He said that he, too, was able to forget about the war and the pain he experienced thanks to the sport.

"My biggest dream is to keep the star and crescent flag flying by attending competitions for Turkey," he said. The president of the Turkey Taekwondo Federation, Metin Şahin, said that as a federation, they have prepared many projects in order to introduce sports to young Syrian refugees in the country. He said that special permission is acquired from the World Taekwondo Federation (WTF) so that Syrian athletes can attend international competitions as refugees. The Turkey Taekwondo Federation's Kilis representative and national team trainer Mustafa Tohumcu mentioned that the number of Syrian athletes who attended classes exceeded 3,000. Explaining that Turkish and Syrian children support each other, Tohumcu said that the aid given to the taekwondo classes, which began nearly five years ago, has been increasing regularly. "We have very talented friends among our athletes. Most of them are recovering from the trauma that they experienced during the war thanks to taekwondo. We will show how comfortable our Syrian brothers are living in Turkey by putting them in competitions," he said.