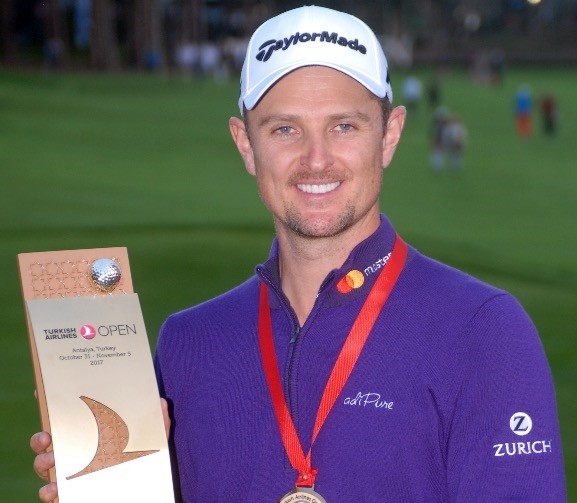 The Turkish Airlines Open 2017 golf tournament ended on Sunday with the victory of Justin Rose from Team England. After the successful organization, Turkey is now aiming for the sky in golf tourism. Turkish Golf Federation President Ahmet Ağaoğlu said the construction of 50 more golf courses in Antalya would enable Turkey to earn between $1 billion and $1.5 billion, adding that last year Turkey hosted 110,000 golf players.

"Golf is the locomotive of the sports industry. This is very clear. Numbers are already proving it," he said. He reminded that Spain earns around 5 billion euros a year from golf tourism.

He also said golf is not just sports for the rich, but it is a sport played by those who run the world. He added the highest-earning sportsman is a golfer and golf tourism generates the most income.

Justin Rose was crowned the 2017 Turkish Airlines Open champion with a final round of 65.

Foreign Minister Mevlüt Çavuşoğlu and Youth and Sports Minister Osman Aşkın Bak had handed over the prize to Rose. Ağaoğlu also said the tournamen is the best response to those who want to form a detrimental public opinion of Turkey and he was happy with the event attendance this year.

"This year, everything was like the previous years. Many important sportsmen competed in the event," he said.

"Olympic champion Justin Rose, silver medalist Henrik Stenson, Tyrell Hatton, Matt Fitzpatrick were among those sportsmen. Three-four time champion Padraig Harrington and others hiked the tournament's score," he added. Ağaoğlu also said the tournament had become the seventh or eighth most important tournament in the world. The tournament's appearance on the social media feed of international media and well-known players also made a contribution to Turkey's prestige, he said.

"These people are role models of the world. While we are going through troubles, New York Times gives 1.5-2 pages to this event; Justin Rose attends the event and clicks a selfie in front of the Turkish flag," he said.

These things add to the positive perception of Turkey abroad, he added. The fifth Turkish Airlines Open started on Thursday and ended Sunday in Turkey's Mediterranean resort of Antalya; 78 golfers competed in the four-day event. The Turkish Airlines Open is the third last tournament on the European Tour's Race to Dubai and has a prize fund of $7 million. Rose's win moves him to second place in The Race to Dubai.

The Englishman, last year's Olympic gold medallist, was in the group two shots off the lead going into the final day and pushed his way into contention with a front nine of 32 shots and three birdies in the last four holes were enough to claim victory. Last year's champion Thorbjorn Olesen was fifth, three shots back, while Race to Dubai leader Tommy Fleetwood was 23rd.