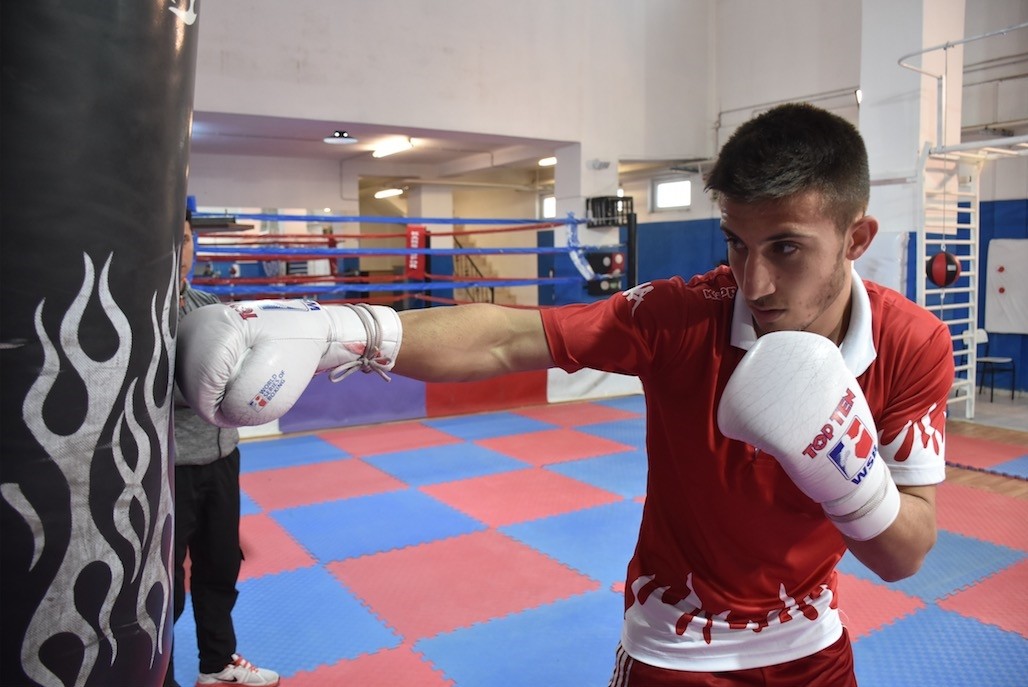 Tuu011frul Erdemir is now preparing for the U22 European Confederation Youth Boxing Championship and Mediterranean Games.
by Daily Sabah with AA Nov 17, 2017 12:00 am

A loss in the 2010 Turkey Junior Box Championship changed young boxer Tuğrul Erdemir's life forever, and fueling his determination, Erdemir has not lost in Turkey since and now has one European and two world championship titles to his name

Tuğrulhan Erdemir's story brings Sylvester Stallone's cult hit "Rocky" to mind. An 18-year-old from eastern Turkey's Kars, Erdemir started boxing at the age of seven. With his family supporting him from the very beginning, he made it to the 2010 Turkey Junior Box Championship, where a loss in the semifinals changed his life forever. Erdemir was down but not out as the defeat only fueled his determination and will to work even harder with very limited resources. He has not lost in Turkey since and now has one European and two world championship titles to his name. Erdemir won his first title at the International Boxing Association (AIBA) Junior World Championships in the lightweight category when he beat Ireland's Patrick Donovan in a unanimous points decision. He clinched his second title at the AIBA Youth World Championships held in St. Petersburg in 2016, against Russian rival Sergei Markarian. In October of the same year, he won the gold medal in the 27th edition of the EUBC European Confederation Youth Boxing Championships held in Antalya.

Eventually, Erdemir ruled the middle of the ring against Russia's Brandenburg Youth Cup winner Musa Maruev in the final and his confident style was enough to earn him the title in Antalya.

Speaking to Anadolu Agency (AA) Erdemir said, "My father did not believe that I could become a boxer. When I first started, I was very young so I participated in local youth competitions. Then I went to Nevşehir in 2010 for my first Turkish championship. I was very excited but I lost and came in third. This made me very furious and ambitious. I promised myself that I would try my best to become the champion from then on."

He continued, "Later, I won the Turkey Championship gold in the 38.5-kilogram category in Erzincan. My coach told me that defending a title was more important than earning one. So I worked harder every day. Since then I have never lost another match in Turkey. In 2013, I lost to my Russian rival in the European championship final. That was my only and final loss in Europe."

He is now preparing for the U22 European Confederation Youth Boxing Championship and Mediterranean Games. The young boxer thanked Youth and Sports Minister Osman Aşkın Bak for his support. Meanwhile, Erdemir's coach Kıvanç Buru praised him for his resiliency.

"After his defeat in the Turkey Championship he became very ambitious and said to himself that he will never lose again. Though he lost one more time in Europe because of the referees. He has earned a number of successes. I hope he will be successful in the 2020 Tokyo Olympics and make our country proud. We are working very hard for that," he said.