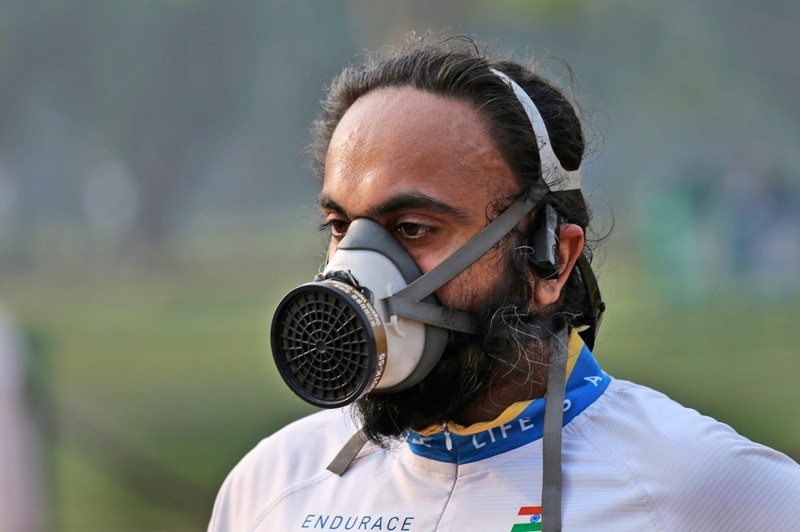 Tens of thousands of runners Sunday choked through smog for the Delhi half marathon, ignoring dire health warnings from doctors who fought for the controversial race in the heavily polluted capital to be postponed.

More than 30,000 people, some sporting pollution masks, braved a hazy morning to run through the Indian capital despite almost two weeks of hazardous smog that forced schools shut for several days.

The US embassy website Sunday showed levels of the smallest and most harmful airborne pollutants hovered near 200 -- eight times the World Health Organization's safe maximum -- for the duration of the 13.1 mile (21 km) race.

Some athletes complained of side effects from the polluted conditions which worsened as amateur runners -- the bulk of Sunday's competitors -- huffed and puffed around Delhi's smoggy streets later in the morning.

"My eyes are burning, my throat is dry. I have a running nose," said running enthusiast Rohit Mohan, a 30-year-old from the southern city of Bangalore who was among the minority donning a mask.

"It's been terrible since I landed here yesterday."

Others expressed frustration at being forced to take precautions unnecessary elsewhere, like wearing masks that filter pollutants but also restrict breathing.

"It's obviously much harder to breathe, so you're not doing your best here, and you can't take it off," Abhay Sen, 30, told AFP.

"Makes you think whether you want to do this again or not."

"It's bright and pleasant. We are simply loving it," said 28-year-old runner Saikat Banerjee, despite the high level of airborne pollutants.

Race organisers declared the event an unequivocal success that "lived up to its legacy of being the world's most prestigious half marathon".

Birhanu Legese of Ethiopia, who won the men's race Sunday, said elite competitors "were scared" before the race but the pollution was "not that bad".

"I would say it was perfect to run," he said.

Other sporting events in the capital -- such as a top-level state cricket match Sunday and a recent international golf tournament -- have attracted less attention despite the hazardous levels of pollution.

A satirical video widely shared on social media in recent days showed a runner chain smoking cigarettes and inhaling exhaust fumes to prepare for the race.

The Indian Medical Association had asked the Delhi High Court to postpone the event, but were told organisers had taken proper precautions.

The course was sprayed with salted water to keep dust levels down. Light drizzle in the capital early Saturday also eased the toxic highs of last week.

But as the race progressed pollution readings climbed above 200 -- levels at which active people "should avoid all outdoor exertion", the US embassy warns.

"But here we are running a marathon," said Ashish Shakya, 31, who for his part decided not to race because of the unhealthy air and watched from the sidelines in a mask.

Pollution regularly spikes across north India and Pakistan at this time of year as farmers burn post-harvest crop stubble and cooler temperatures prevent pollutants from dispersing.

Delhi is often ranked one of the world's most polluted capitals, and local authorities have been blasted for failing to offset this annual scourge.

Some runners saw their participation Sunday as an act of defiance.

"I know pollution is bad and it can affect my health but I am still participating," said Sitam, who like many Indians goes by one name.

"I want to send a message to the government to do something for fitness enthusiasts and ensure a pollution-free environment for them."