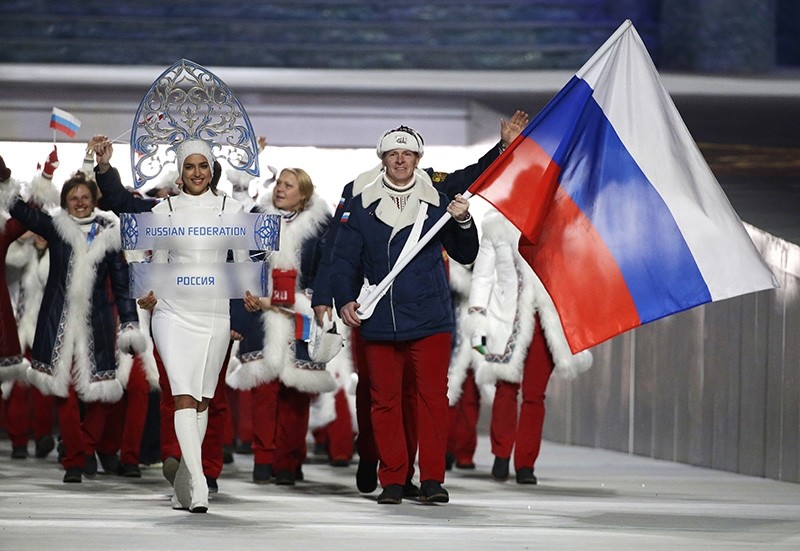 In this Feb. 7, 2014 file photo Alexander Zubkov of Russia carries the national flag as he leads the team during the opening ceremony of the 2014 Winter Olympics in Sochi, Russia. (AP Photo)
by Compiled from Wire Services Dec 04, 2017 12:00 am

The International Olympic Committee meets from Tuesday to decide whether to bar Russia from the 2018 Winter Olympics for doping violations, in one of the weightiest decisions ever faced by the Olympic movement.

Observers say it was the Kremlin's desire for victory that fueled the cheating that spectacularly backfired, with the country losing its top ranking in the 2014 Sochi Winter Olympics after being stripped of 11 medals for doping.

"Sport is a huge media and political resource and Sochi was very important for the country's image," said political commentator Sergei Medvedev, adding Russia had resorted to mass-scale doping to guarantee victory in the Sochi games.

"It turns out they overplayed their hand and the largest scandal in the history of the Olympic movement ensued," the professor at the Moscow-based Higher School of Economics told AFP. "It is a huge blow to Russian sport."

Russia may not be barred from the world's most prestigious sporting event altogether but IOC officials are likely to ban Russian emblems including its flag and anthem from the games.

The buildup to the high-stakes summit in Lausanne 66 days before the start of the 2018 Games has been dominated by an almost daily drip of negative news for Vladimir Putin's winter sports heavyweights.

On Nov. 26, athletics' ruling body the IAAF maintained its two-year long suspension of Russia imposed over claims of state-sponsored doping. That ban prevented its athletes from competing at the 2016 Rio Olympics and this year's World Championships in London.

The IAAF ruling followed the World Anti-Doping Agency announcement on Nov. 16 that Russia was still not compliant with international rules on doping.

Russia's chances of going to Pyeongchang were further damaged by a raft of bans handed out to its medalists at the Sochi 2014 Games in the past week.

In total Russia was stripped of 11 of its 33 medals for cheating, meaning it has lost its position at the top of the Sochi medals table to Norway.

The explosive, WADA-commissioned 2016 McLaren report alleged state-sponsored doping in Russia and saw the country shut out of the agency.

The investigation said the cheating peaked at the 2014 Winter Olympics in the Black Sea resort of Sochi, where Russian secret agents engineered an elaborate system of state-backed doping.

Among those named and shamed for drug-taking last month was Russia's flag carrier at the Games, Alexander Zubkov, who was stripped of his four and two-man bobsleigh titles.

Exclusion from Pyeongchang is causing consternation in Russia's government.

Moscow has consistently denied running a state-orchestrated doping program, seeking to pin all the blame on sporting officials.

At Friday's World Cup draw in the Kremlin, Deputy Prime Minister Vitaly Mutko decried the doping allegations as an attempt "to create an image of an axis of evil" against Russia.

"But this is all because we are such a great sport superpower," added Mutko, who was barred from attending the 2016 Summer Olympics over the drug-cheating scandal.

In an appeal to the IOC he added, "We are relying on common sense, on the IOC Charter, on the assumption that no one abolished the presumption of innocence."

Putin in October accused the United States of putting indirect pressure on the IOC to block Russia from South Korea.

He warned if the IOC left Russia out in the cold, it would cause "serious harm to the Olympic movement."

"There are two options," Putin said. "Either forcing Russia to compete under a neutral flag or not letting it go to the Olympics at all."

"Either one is humiliation for the country," he insisted.

A Russia ban would have a major impact on competition in Pyeongchang, notably in disciplines like figure skating, cross-country skiing, speedskating and bobsleigh.

Gracenote Sports, which forecasts a "virtual medal table" based on recent results, predicts Russia will win 21 medals, six of them gold, if it competes in Pyeongchang.

That puts Russia eighth on predicted gold medals, or joint fifth on total medals. If Russia is banned, opportunities open up for many other countries.