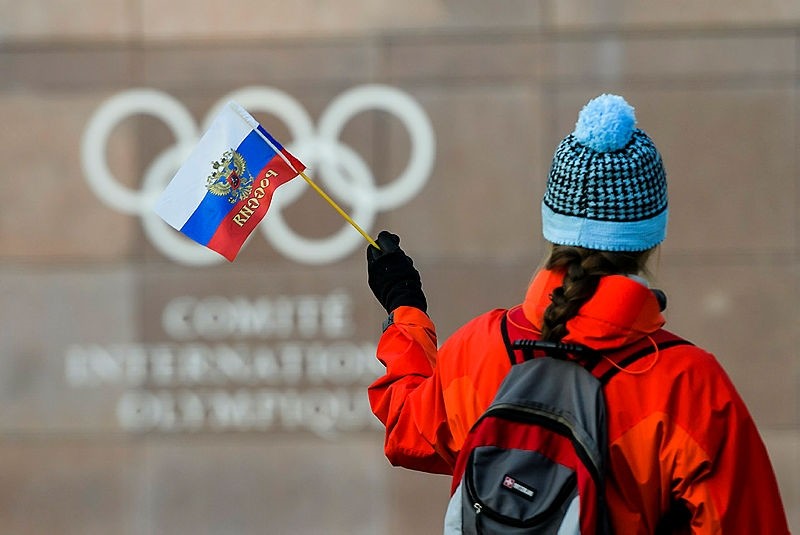 A woman holds a Russian flag in front of the Olympic Rings logo during the Executive Board meeting, at the International Olympic Committee (IOC) headquarters, in Pully near Lausanne, Switzerland, Dec. 5. (AP Photo)
by Compiled from Wire Services Dec 05, 2017 12:00 am

Russia's Olympic Committee (ROC) has been banned from the Pyeongchang Winter Olympics next year after the prolonged doping scandal but some athletes will be allowed to compete under the tag of "Olympic Athlete of Russia", the International Olympic Committee said on Tuesday.

In announcing the decision, IOC president Thomas Bach accused Russia of "perpetrating an unprecedented attack on the integrity of the Olympic Games and sport".

The IOC also decided to suspend ROC president Alexander Zhukov as an IOC member given that his membership is linked to his position as ROC President.

The IOC announced the decision after examining evidence of state-sponsored doping over several years that reached a high-point at the Winter Olympics hosted in Sochi, Russia, in 2014.

The committee told a news conference that the Schmid report confirmed "the systematic manipulation of the anti-doping rules and system in Russia."

Samuel Schmid, author of the report, told journalists: "The results are not based only on (whistleblower) Grigoory Rodchenkov's testimony. There is scientific evidence, witness statements documents and correspondence.

"The facts are that in Russia there was systemic manipulation of doping and the anti-doping system ... that also took place at Sochi 2014 (Winter Olympics)."

Mounting evidence indicated that the scheme involved senior government officials, including from the sports ministry, with help from secret state agents.

The IOC's decision comes 18 months after it had refused an outright ban of Russian athletes at the 2016 Rio de Janeiro Olympics and told international sports federations to decide individually on the participation of Russians in Brazil.

While all the track and field athletes bar one and the entire weightlifting team were banned from Rio, around 70 percent of Russia's original 387-strong squad ended up taking part at those Games.

Tuesday's decision, however, looks to have taken into account growing vocal protests from other countries, major national anti-doping agencies and individual athletes who felt they had been robbed by their Russian opponents for years and had demanded a full suspension of Russia.

Nations have in the past been barred from taking part in the Olympics, notably South Africa during the apartheid years, but none has ever been handed a blanket ban over doping.