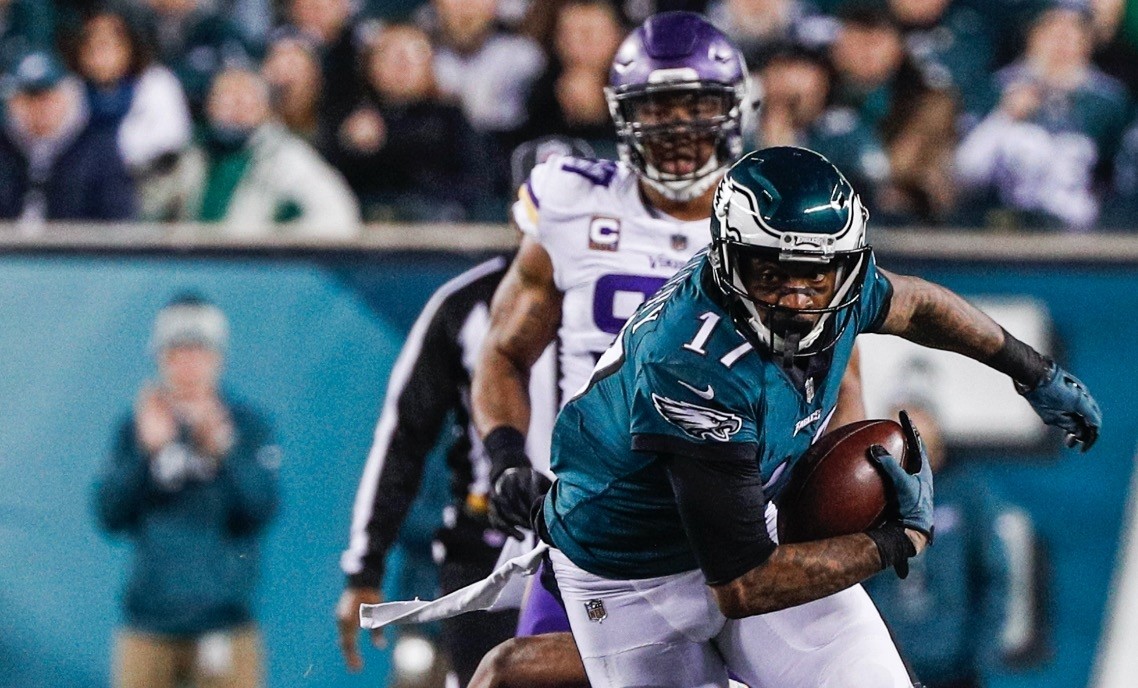 Philadelphia Eagles wide receiver Alshon Jeffery (R) escapes from Minnesota Vikings cornerback Xavier Rhodes (L) in the second half of the NFC Championship game at Lincoln Financial Field in Philadelphia.
by Jan 23, 2018 12:00 am

"It's pretty crazy," Brady said. "It's pretty amazing to be on a team that wins this kind of games. It's so great."

Nick Foles, who took over as Philadelphia's quarterback last month after an injury to Carson Wentz, completed 26-of-33 passes for 352 yards and three touchdowns as the underdog Eagles humiliated the visitors.

"This moment, it's unbelievable. It's humbling," Foles said. "The team was amazing. I'm a little speechless. It's amazing soaking this all in. We all believe in each other. Everyone was against us. We came in here and came out with an amazing victory."

It will be a rematch of Super Bowl 39 from 2005 when Brady threw two touchdown passes and the Patriots won 24-21 for their third title in four seasons, equal to the same run they could complete in two weeks.

"Now we have to go to Minnesota and finish the job," said Patriots owner Robert Kraft.

The Eagles, whose two Super Bowl defeats also include 1981, last won an NFL title in 1960 before the Super Bowl era began. Brady, who needed stitches for a right-hand injury suffered Wednesday in practice, lost his favorite target, tight end Rob Gronkowski, with a second-quarter concussion. But the 40-year-old quarterback completed 26-of-38 passes for 290 yards, 138 of them in the fourth quarter.

"We said whatever it takes," Brady said. "That was a great second half. Just so proud of our team. Amazing."

Brady finally addressed the Wednesday cut to his throwing hand that becomes a major pre-game concern.

"It was just a pretty good cut. I dealt with it the best I could," Brady said.

"I've had a lot worse. Wednesday, Thursday, and Friday were a little scary. I gained some confidence on Saturday and we did just enough to win."

New England pulled within 20-17 on Brady's 9-yard touchdown pass to Danny Amendola with 8:44 remaining. Amendola returned a punt 20 yards to the Jaguars' 30-yard line, then made a diving catch and three plays later leaped high and made an acrobatic tiptoe landing for a 4-yard touchdown reception to create the final margin.

"It means a lot. We worked so hard for this," said Amendola, who caught seven passes for 84 yards.

Case Keenum's 25-yard touchdown pass to Kyle Rudolph opened the scoring for Minnesota, but Patrick Robinson returned an intercepted Keenum pass 50 yards for a touchdown to equalize at 7-7. Former Patriot rusher LeGarrette Blount ran 11 yards for an Eagles touchdown and Foles followed with touchdown passes of 53 and 5 yards to Alshon Jeffery and 41 yards to Torrey Smith. The Vikings, whose last Super Bowl was in 1977, would have been the first team to play a Super Bowl in its home stadium. Dome-based teams fell to 0-13 in outdoor conference championship contests.