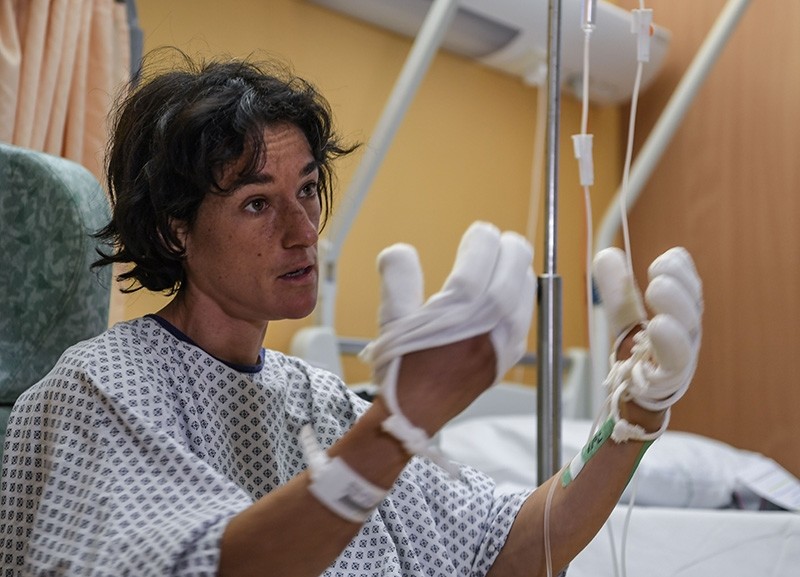 French mountaineer Elisabeth Revol talks to journalists during an exclusive interview to AFP, on January 31, 2018 at the hospital in Sallanches french Alps. (AFP Photo)
by French Press Agency - AFP Feb 02, 2018 12:00 am

A French mountaineer who was rescued in a dramatic night-time operation on Pakistan's "killer mountain" has told how she had to leave her weak and bleeding climbing partner and descend the peak alone in darkness.

Elisabeth Revol, speaking exclusively to AFP from a hospital in France's Haute-Savoie region -- where doctors are assessing whether she will require amputations due to frostbite in her hands and left foot -- said rescuers urged her to leave behind Tomek (Tomasz) Mackiewicz, a Polish national.

She earlier described the decision as "terrible and painful."

It was Revol's fourth attempt, her third with Mackiewicz, to scale the 8,125-meter (26,660-foot) Nanga Parbat during the winter season, when they ran into trouble amid frigid temperatures and high winds.

An elite group of Polish climbers managed to reach Revol but were unable to get to Mackiewicz, who was stranded further up the mountain.

Revol, who weighed just 43 kilograms (95 pounds) following her ordeal, left France on Dec. 15 and began her adventure with Mackiewicz on Jan. 20.

A few days later, as they approached the summit, she says they "felt good." By early evening they finally reached the peak -- making Revol the first woman to scale the mountain in winter, without oxygen or sherpa. 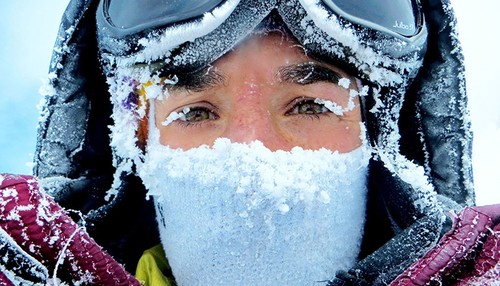 But their joy was shortlived.

"Tomek told me 'I can't see anything any more,'" Revol recalled.

"He hadn't used a mask because it was a bit hazy during the day and by nightfall he had ophthalmia (an inflammation of the eye). We hardly had a second at the top. We had to rush to get down."

Mackiewicz clung to Revol's shoulders and they began the long, difficult descent in darkness.

"At one point, he couldn't breathe," Revol said. "He took off the protection he had in front of his mouth and he began to freeze. His nose became white and then his hands, his feet."

They huddled overnight in a crevasse, trying desperately to shelter from the biting wind.

But Mackiewicz no longer had the strength to continue the descent and by sunrise, his condition had deteriorated further.

Revol recalls that he had "blood streaming from his mouth", a sign of oedema -- a buildup of fluid in the body and the ultimate stage of acute mountain sickness, which can be fatal without urgent treatment.

The mountaineer alerted everyone she could that they needed help but certain messages were lost in transmission.

Eventually, instructions came through from her rescuers. "They told me, 'If you go down to 6,000 meters, we can pick you up, and we can get Tomek at 7,200 meters.'"

She added: "It wasn't a decision I made, it was imposed on me."

To Mackiewicz, she remembers simply saying: "Listen, the helicopter will arrive late afternoon. I must go down, they'll come to get you."

Sending her GPS coordinates to rescuers and convincing herself that she would survive, she took nothing with her for the remainder of her journey -- "not a tent, not a duvet, nothing."

Revol had thought the rescuers would arrive late that afternoon but when they didn't turn up, she was forced to spend another night down a crevasse.

But "I knew I was getting out. I was in my hole and I was freezing cold but I wasn't in a desperate situation. I was more worried for Tomek, who was much weaker."

It was then that she began to have altitude-induced hallucinations, imagining that people were bringing her hot tea -- and that to thank them, she had to give them her shoe.

She was barefoot for five hours, and developed frostbite.

Exhausted at 6,800 meters, Revol decided to stay put to preserve her strength and keep warm.

Her hopes were raised by the whirring noise of a helicopter overhead, but the wind was gathering strength and the rescue team was unable to land.

After realizing she would have to spend a third night in the open, "I started to question whether I would survive," she says, adding that she had not received a message sent by the Polish climbers telling her they were coming.

Finally, she began her final descent, with wet gloves and frozen feet, and managed to reach one of the camps at around 3 a.m.

"And then I saw two headlamps arriving. So I started to yell. And I said to myself, 'OK it's going to be ok. It was incredibly emotional."

Revol was later flown to Islamabad and on to Switzerland on Thursday, before being transported across the border.

Will she ever climb again?