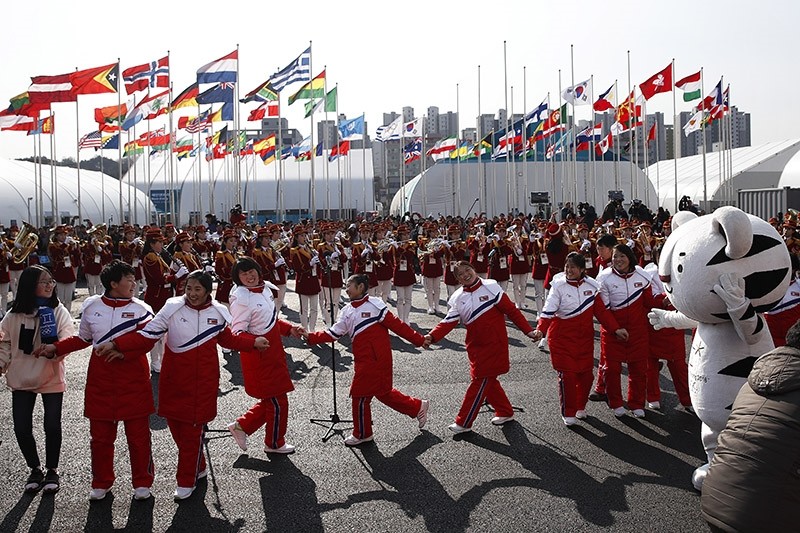 In this Feb. 8, 2018 photo, North Korean athletes dance as members of the county's cheering group perform during a welcome ceremony at the Olympic Village ahead of the 2018 Winter Olympics in Gangneung, South Korea. (AP Photo)
by Compiled from Wire Services Feb 09, 2018 12:00 am

Yonhap News agency said Friday the North Koreans rejected the offer to use the Samsung Galaxy Note 8 phone during the Games and return it upon their departure.

The phones created a dilemma for the Pyeongchang Organizing Committee, which considered whether giving them to the 22 North Korean athletes would violate United Nations sanctions that ban trading luxury products with North Korea.

Organizers initially said the North Koreans and Iranians would be denied the devices due to UN sanctions on their countries.

Then the International Olympic Committee (IOC) said they would be provided for the Games, but the two countries' representatives would be asked to return them afterwards rather than keep them.

It was not clear how the IOC would ensure compliance with the request.

An IOC spokesman was unable to confirm the reports when contacted by AFP.

Iranian athletes were also subject to deliberation due to sanctions against Iran.

The ban on Iranians keeping the phones had provoked a furious reaction in Teheran, with authorities blaming the manufacturer for the situation.

Iran's foreign ministry summoned South Korea's ambassador Kim Seung-ho to lodge a "strong protest" over what it called Samsung's "dishonest conduct that is contrary to the spirit of the Olympic Games".

The ambassador was warned that "if Samsung does not make its excuses... this affair will have strong repercussions on commercial relations between the Samsung Group and the Islamic Republic of Iran".

Samsung, the world's biggest smartphone and memory chip manufacturer, is a crucial part of South Korea's economy, with the group's turnover equivalent to a fifth of the national GDP.

The IOC later backed down.

"Regarding Iran, we can confirm that all participants will be able to keep the phones," it said in a statement late Thursday.

"Regarding North Korea, all participants are requested not to take the phones back to their home country but to only use them during their stay in Pyeongchang," it added.

The Galaxy Note 8 retails for around 1,000,000 South Korean won ($920) and so could fall foul of U.N. measures banning supplies of luxury goods to the North.

A Samsung spokeswoman stressed the electronics giant had nothing to do with the distribution of the handsets and all decisions were by the IOC.