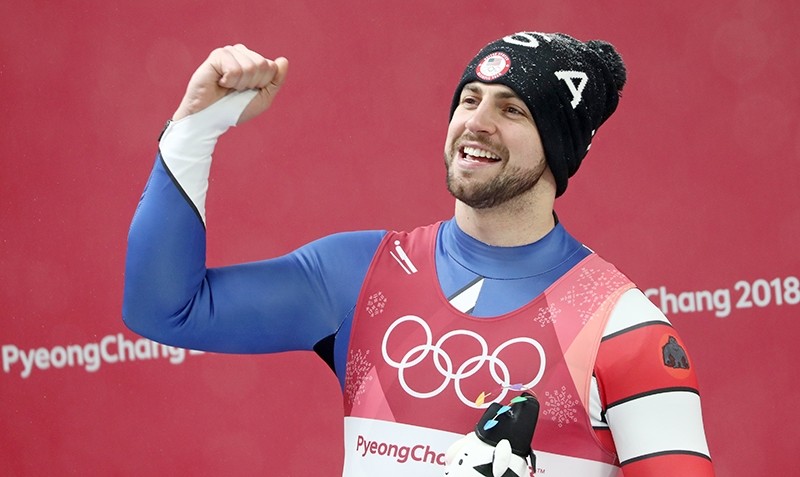 Chris Mazdzer of the USA reacts during the venue ceremony after winning the silver in the Men's Luge Singles competition at the Olympic Sliding Centre during the PyeongChang 2018 Olympic Games, South Korea, Feb. 11, 2018. (EPA Photo)
by Daily Sabah with Reuters Feb 13, 2018 12:00 am

Athletes from the United States and Russia are traditionally fierce adversaries but American Chris Mazdzer, who won a surprise luge Olympic silver medal on Sunday, was blown away by a generous offer from a Russian rival.

"This goes against every Russian-USA stereotype ever but one of the Russian athletes actually wanted me to use his sled because he didn't think he would come to the Olympics and he wanted to know what it could do," Mazdzer told reporters on Monday.

"That friendship and trust was really moving."

The 29-year-old did not reveal the name of the athlete in question but said the offer came only weeks ahead of the Pyeongchang Games.

"I'm going to keep the name down. It was crazy, happened one morning," added Mazdzer. "It shows we care about each other and there is this human connection which crosses countries and cultures and sport is an amazing way to accomplish it."

Mazdzer finished runner-up to Austrian David Gleirscher at the Olympic Sliding Center on Sunday to become the first American man to claim a luge medal at the Winter Games.

Russians and Americans competing in the skeleton, however, haven't been as friendly.

Skeleton racers from both countries are refusing to speak to each other at the Games in a spat that centers on allegations of widespread Russian doping.

Speaking to Reuters after training runs on Tuesday, two athletes from Russia and an American skeleton racer said there was no contact between them, mostly because of the underlying tensions surrounding Russian athletes' presence at the Games.

"Do I believe they've competed fairly? No, and I've been very vocal about that. So I don't really have a need to have a conversation with those athletes," said U.S. skeleton athlete Matt Antoine, who won bronze at the 2014 Sochi Olympics.

Russian skeleton racer Nikita Tregubov said his American rivals did not speak to him or compatriot Vladislav Marchenkov, creating an unpleasant atmosphere around the track.

"They scold us without evidence," Tregubov said.

"We weren't the ones who started it. It wasn't us. I didn't start anything. It's up to them to start over for there to be a good atmosphere."

The International Olympic Committee (IOC) last year banned Russian athletes from competing formally from these Games over what it called the "systematic manipulation" of doping tests at the 2014 winter Games in Sochi, Russia.

Instead, it has allowed Russians with no history of doping to compete at the Games as neutral athletes, at its invitation.