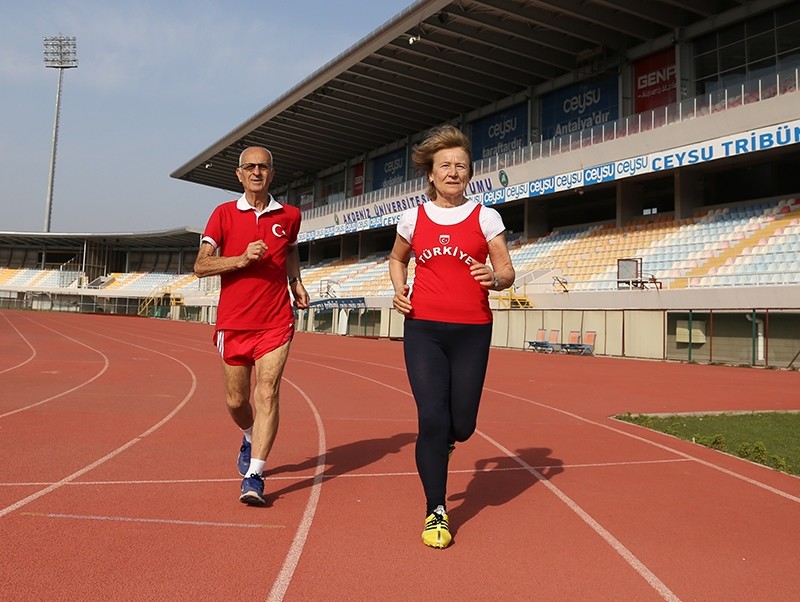 For one Turkish couple, athletics has been the inspiration that has kept their marriage running for 52 years.

Oktay Şensoy, 81 and his 76-year-old wife Çiçek fell in love over their mutual passion for sports and have competed together all over the world.

"Our love started on the track," Çiçek told Anadolu Agency. "Oktay and I have been running together for 57 years."

When they first met, Çiçek, whose maiden name was Solon, was an ambitious basketball and volleyball player for Istanbul University Sports Club. Oktay Şensoy, an avid runner, was commissioned as her team's coach.

Both found their stride in running, Çiçek competing in short distance races and Oktay in long distance.

After college, the couple competed and coached for Fenerbahçe Sports Club.

Çiçek Şensoy went on to become Turkey's first female national coach for the Ministry of Youth and Sports.

The couple, who still competes for Turkey's national team, has broken records and won numerous medals and trophies in international competitions.

They say they have found mutual strength in competing at the same events.

Çiçek Şensoy remembers one 50-km race in Turkey's southern Mersin province that was a particular challenge for her husband.

"Halfway through the race, I picked some tangerines from the garden and gave them to him. I've always supported him," she said.

The veteran athletes say running together every day keeps their marriage happy and healthy.

"It is easy to solve some problems because we have a common point in sports," Çiçek said. "We enjoy life thanks to sports."

On special occasions, Çiçek and Oktay like to give each other sporty gifts, usually athletic wear like a new pair of running shoes or tracksuits.

"I could never want a jeweled ring or fur coat from my husband, just buy me a pair of track shoes," laughed Çiçek.

"The secret to a happy marriage is the common point. Don't wait around for days to pass, celebrate each day like Feb. 14," advised Çiçek, who has raised two daughters and now has a 23-year-old granddaughter.

Çiçek Şensoy finished first in the 100 m and 200 m races of the Balkan championship in Bulgaria last October and is currently training for the upcoming Turkish championship on Feb. 24.