Paralympics kick off in Pyeongchang with Russia, NKorea in spotlight 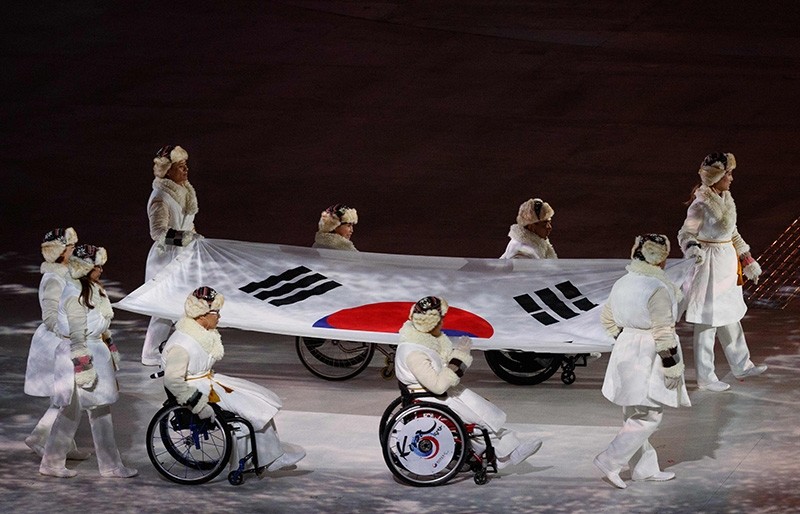 Flag bearers enter with the South Korean flag during the opening ceremony of the Pyeongchang 2018 Winter Paralympic Games at the Pyeongchang Stadium on March 9, 2018. (AFP Photo)
by Daily Sabah with DPA Mar 09, 2018 12:00 am

The Winter Paralympics were officially opened at a ceremony in Pyeongchang, South Korea on Friday.

South Korean President Moon Jae In declared the Games open at the Olympic Stadium, scene of the opening and closing ceremonies at last month's Winter Games.

The Paralympics will see 567 athletes from 49 countries compete for medals in 80 disciplines until March 18.

"We have many similar topics, that's true," Andrew Parsons, president of the International Paralympic Committee (IPC), told DPA. "But we have our own Games."

The debate about the participation of 30 neutral Russian athletes was already raging after the nation as a whole was banned from the Games, just like the Olympics, because of widespread Russian doping practices.

But an IPC decision on the eve of the event has brought further controversy.

Russian biathlete and cross-country skier Mikhalina Lysova has been invited to the Paralympics despite the German Disabled Sports Association saying her name appears in the McLaren report alleging a state-run doping conspiracy.

Lysova's nomination has caused "amazement," the association said in a statement. "Her name appears in the McLaren report...Lysova is under suspicion of manipulation."

But Parsons said the visually impaired athlete had fulfilled all IPC criteria.

"We believe she is clean," he said.

Unlike the Olympics, where the International Olympic Committee allowed Russian competitors to use the term "Olympic Athletes from Russia" (OAR), the country name will not appear at the Paralympics. They will solely be called "Neutral Paralympic Athletes" (NPA).

Parsons said IOC president Thomas Bach will be in attendance at Friday's opening ceremony. Germany's Bach did not attend the Rio Paralympics in 2016 and was heavily criticized by some athletes.

The Winter Paralympics in Pyeongchang will break several records and see a number of firsts.

The IPC says there will be an unprecedented number of participating nations (49), athletes (576), doping tests (600) and media representatives (800). Even the 310,000 tickets could be sold out completely and the IPC is considering putting extra tickets on sale.

For the first time at a Winter Paralympics, two North Koreans will take part, both in cross-country skiing. However, unlike at the Olympics, North and South Korea will not march together at the opening ceremony. The IPC said it was disappointed by the delegates' decision.

Norwegian Lena Schroeder will play on the men's ice hockey team, only the second woman to do so and first in 24 years.

US snowboarder Brenna Huckaby, who has a prosthetic leg, was the first female para-athlete to model a swimsuit for the US magazine Sports Illustrated.

German alpine skier Anna Schaffelhuber, the star of the previous Winter Paralympics in Sochi four years ago when she won five golds, is making a return but faces the toughest competition from compatriot Anna-Lena Forster.

Cross-country skier and biathlete Andrea Eskau, who is also a handcyclist, is the only starter in Pyeongchang who has already won gold in both Summer and Winter Paralympics.