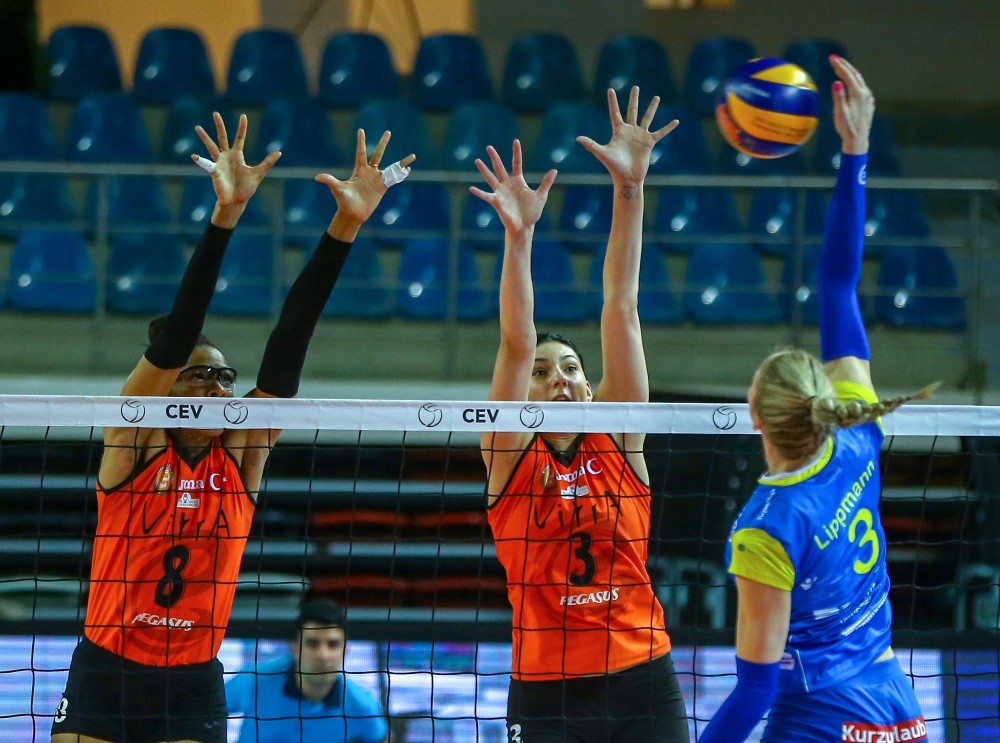 Turkish Tigers will play against Belarussian rival Minchanka Minsk in the Final of the 2018 CEV Volleyball Cup on April 3. In the men's tournament, Ziraat Bankası takes on Belogorie on the same day

Eczacıbaşı VitrA became the first team to reach the final of this year's Women's CEV Cup volleyball tournament as it defeated SSC Palmberg at home Tuesday. The Turkish club did not lose a single set throughout the semi-finals, showing a good disposition toward the last round of the competition. Eczacıbaşı VitrA edged to an 8-6 lead in the first set thanks to consecutive attacks from Meliha İsmailoğlu, Rachael Adams and Jordan Larson. Two back-row kills by the German team moved the score to 9-9. Just before the second technical timeout, SSC Palmberg head coach Felix Koslowski stopped the match once again and took another break at 14-9 for Eczacıbaşı.

Maja Ognjenovic started to set more balls to Adams and the American star added three more points to the count of the Orange and Whites at 16-10. The set eventually ended at 25-18 for the home side. In the second set, Eczacıbaşı took a two-point lead at 5-3 with Tijana Boskovic's ace point. SSC Palmberg wanted to bounce back and put up a fight; however, it could not stop the Turkish Tigers' effective serves. German setter Denise Hanke put some quality serves while trying to stage a comeback at 11-7. A kill block by Büşra Kılıçlı prompted another German timeout at 13-8. Boskovic stepped in and Eczacıbaşı jumped to a 16-13 lead. The Orange and Whites kept dominating the second set and finished it with the score of 25-19.

In the third set, head coach Marco Motta substituted Tijana Boskovic with Gözde Yılmaz and Büşra Kılıçlı with Beyza Arıcı. Eczacıbaşı struck early again with a 9-7 lead. Motta took the first timeout at 9-8 while Palmberg looked fired up. Rachael Adams stepped into the game and put a block point while the German team kept scoring. Despite the resistance shown by the German champions, Eczacıbaşı ended the third set in their favor as well (25-20) and won the match 3-0, thus progressing to the CEV Cup Finals.

Eczacıbaşı VitrA libero Simge Şebnem Aköz said: "I am very happy that we won 3-0. We delivered a great team effort. I am looking forward to our opponent in the finals. I hope we get good results from both matches and lift the trophy."

Denise Hanke, setter of SSC Palmberg, said: "It was great to play against my former team. They played a good match. I wish them good luck in the final."

In the other match of the day, Minchanka Minsk and Allianz MTV Stuttgart delivered a thrilling duel. They played their second five-set match and needed the Golden Set, where Minchanka prevailed 15-8 to make it to the final.

Meanwhile, Ziraat Bankası and Belogorie are bound to meet in the Final of the 2018 CEV Volleyball Cup. Despite a loss in the tie-breaker, Ziraat reached the final after achieving more points than their Italian opponent Calzedonia, while Belogorie secured their second win without a set loss against Poland's Asseco Resovia.