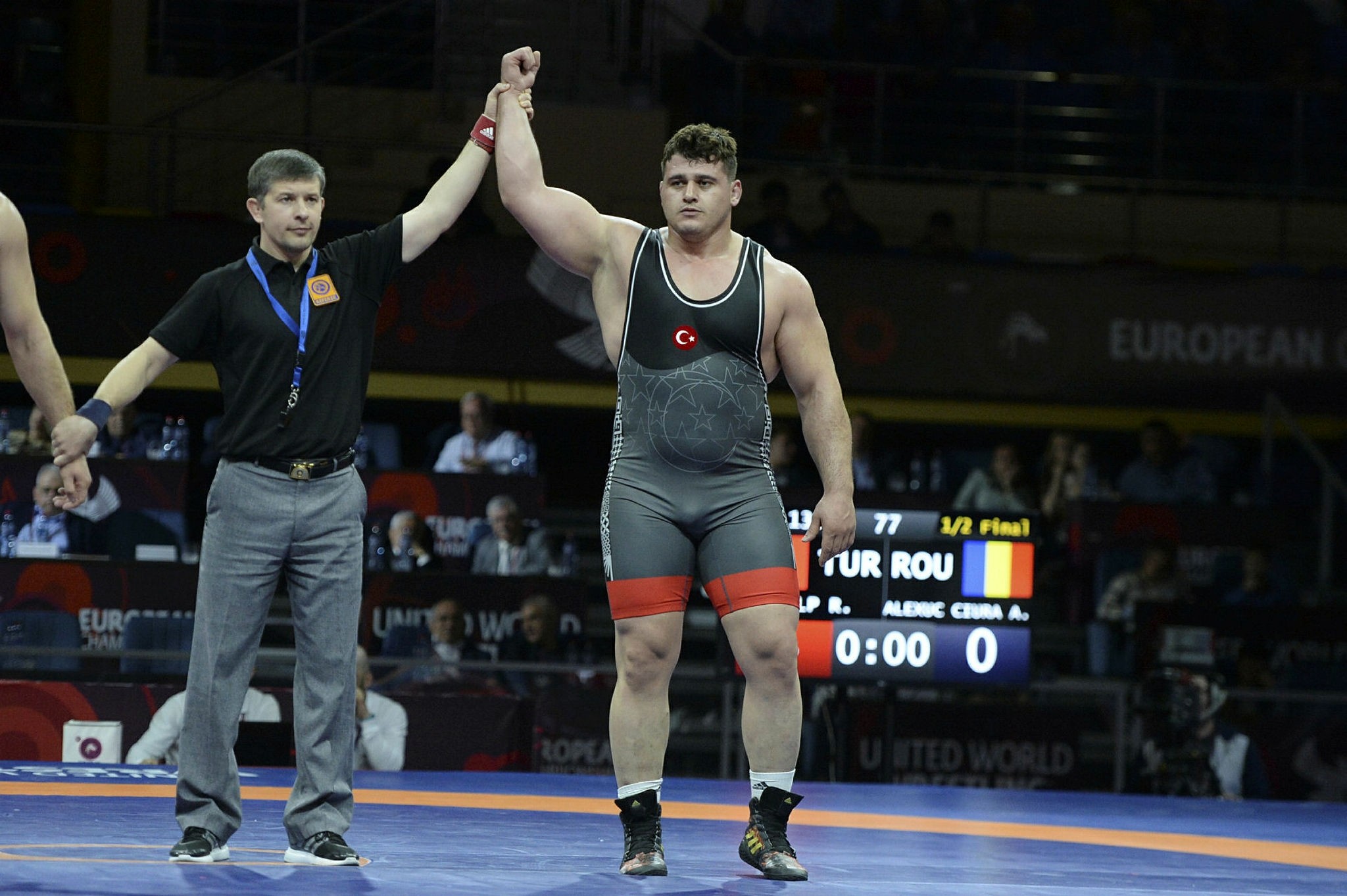 Kayaalp added to his record haul of European titles in front a packed house at the Palace of Sport and Youth in Kaspisk. He came into the 130-kilogram final bout outscoring his opponents 18-0 but ceded a point early in the first period against Russian rival Vitalii Shchur when he was hit with a one-point passivity.

Kayaalp shook off the disappointment and stopped Shchur's gut wrench attempts from the top position. The second period was all Kayaalp as he outpaced Shchur 2-0 to earn the 2-1 win and his record eighth European title, the most by any Turkish wrestler.

Not to be outshone at home, two-time Olympic champions Roman Vlasov, dominated in his finals match to capture a third European title. Vlasov went into the 77-kilogram gold-medal on a tear, racking up 18 points in his first three matches, all without giving up a point.

However, after an accidental head-butt in the first minute of his finals against 2017 world champion Viktor Nemes opened up a gash above his left eye Vlasov ceded his first point. Facing the Russian with his first deficit of the tournament.

Up to that point, the two-time Olympic champion had outscored his first three opponents by a combined score of 18-0. After increasing his pace in the second period, when the clock neared the two-minute mark, the two-time world champion got his opportunity to go in the par terre position. The Russian locked up a highlight-reel belly-to-belly four-point throw on Nemes, giving him the 5-1 victory and returning himself to the top of the 77-kilogram weight class.

"When you win," Vlasov said after winning his match, "It always feels like it's the first time."

In the 87-kilogram category, 2017 world bronze medalist Roberti Kobliashvili scored the first point of the bout by earning a passivity point. The Georgian picked up two additional points off a gut wrench, giving him the 3-0 lead. Bekkhan Ozdoev finally got on the board after picking up a pushout. He would earn a one-point passivity call, bringing the score to 3-2 with just over a minute left.

Mihai Radu Mihut kicked off the gold-medal bout in the 63-kilogram event with a pair of pushouts to take the 2-0 lead over 2016 Olympic bronze medalist, Stig Ande Berge and never looked back.

Mihut, who was competing in his second senior-level European championships, improved on his eighth-place finish from a year ago with the 3-2 win over Berge.

Last year, in the 2017 World Wrestling Championships in Paris Kayaalp had also bagged the gold medal for Turkey. The athlete claimed the title two times before at the 2011 championships in Istanbul and the 2015 games in Las Vegas. The national athlete also received a silver medal at the Rio Games in 2016.