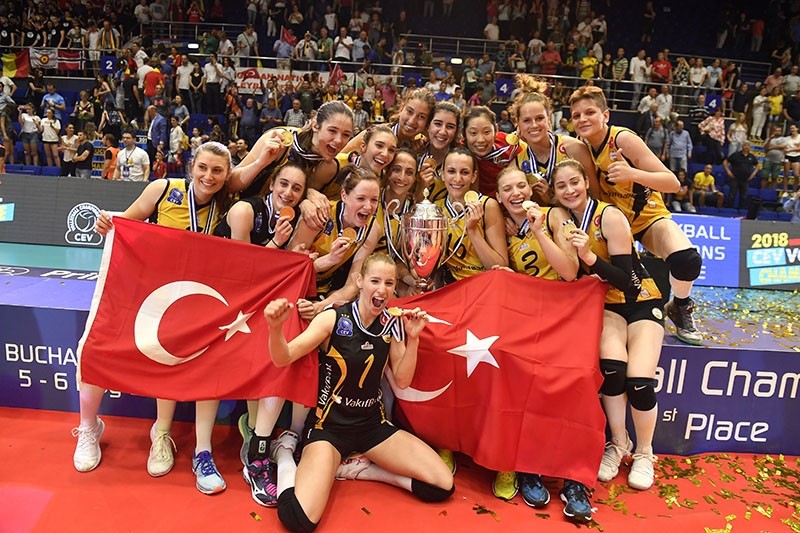 The Turkish powerhouse defended its CEV Volleyball Champions League title from 2017, adding an overall fourth gold medal from the most prestigious club competition in Europe to their record

VakıfBank women's volleyball team cruised to an impressive 3-0 (25-17, 25-11, 25-17) victory against host CSM Volei Alba to triumph with the trophy. As heavy pre-favorite against the first Romanian team in history to play in a Champions League final, VakıfBank made sure they showed immediately who would be calling the shots in this match and stormed into the first set with a 9-1 run.

With noisy support from the packed stands, Alba managed to level the game, but it was already too late to level the score as well. Themselves supported by hundreds of their own supporters, and led by an excellent Zhu Ting, VakıfBank cruised on to a comfortable 25-17 win, with Zhu acing for the last point.

Coach Giovanni Guidetti's squad was even more merciless in the second set. With almost perfect organization by the net and Milena Rasic on fire, VakıfBank left no doubts over their superiority and ran off with a 25-11 win.

Alba put on an effort to return into the match at the beginning of the third set. They even managed a four-point lead at the first technical time-out, but this was as far as they could go.

VakıfBank caught up at 9-9, and after 11-11 scored five in row to practically pre-determine the outcome. Lonneke Slöetjes was instrumental for her team's speedy turnaround and it was her who had the honor of hammering the last ball of the season, closing the set, the match and the tournament at 25-17. Zhu Ting was the best scorer of the match with 15 points for the winning side. Her teammates Lonneke Slöetjes and Gözde Kırdar added 14 and 12, respectively.

With VakıfBank winning the title one more time, Turkish volleyball has achieved the success of taking home the number one cup of women's volleyball in Europe for the sixth time. In the last eight seasons VakıfBank has won four CEV Volleyball Champions League cups, while Fenerbahçe and Eczacıbaşı have won one each.

VakıfBank coach Giovanni Guidetti said, "Today was a different final match. My team played with heart. The only thing I am sad about is that our captain Gözde Kırdar has retired from volleyball. We were together for the last nine or 10 years. She is really the greatest captain in women's volleyball."

After her coach, Kırdar spoke about winning the championship and being honored by her team.

"I think I am the luckiest person in the world. I really feel like it. I have an incredible family. I played in a fantastic team. I always dreamed that I would end my career with such a team. The only thing that I wanted to do is say farewell to volleyball with a cup," she said.

Meanwhile club President Osman Demren said, "We are very happy to bring this cup to our country one more time. We are a big family. I hope our gifts for our country will continue. We are proud that we bid farewell to our captain Gözde with both the Turkish league title and European title. We had gotten the World title in May as you know. I want to thank to all our players."