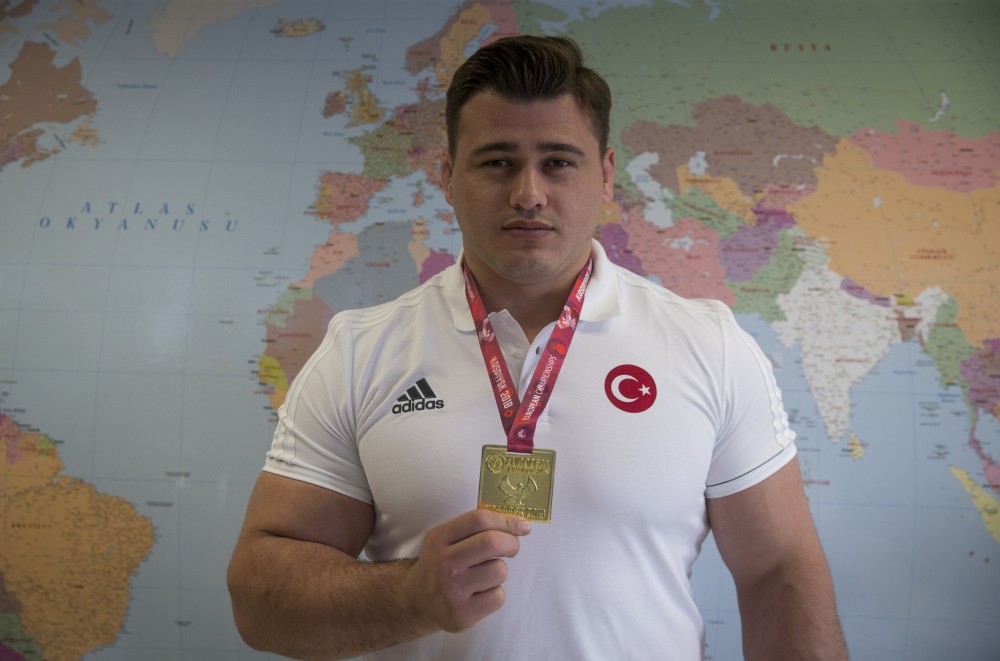 Rıza Kayaalp, Turkey's world and European champion wrestler who recently equaled ‘The Wrestler of the Century' Hamza Yerlikaya's record of eight European titles, said he aspires to become one of wrestling's all-time legends

For Rıza Kayaalp, there is one target now: To be mentioned as a world legend in wrestling like Hamza Yerlikaya. Turkish Greco-Roman wrestler, Yerlikaya, won two Olympic gold medals (in 1996 and 2000), three World Championship titles (1993, 1995, and 2005), and was the only Turkish wrestler to ever become European champion eight times. He was named "The Wrestler of the Century" in 1996 by the International Federation of Associated Wrestling Styles (FILA).

Speaking to Anadolu Agency (AA) after his latest European title, Kayaalp said that he wants to become one of wrestling's all-time greats.

"I finished 2017 as World and European champion. I started 2018 as European champion. Now, I have the World Championship ahead of me. I hope I can win the world title one more time. I want to continue making my dreams come true," said the 28-year-old wrestler.

"I am still young. I can wrestle until I am 32-33. I want to remain top until the 2020 Tokyo Olympics. I am maintaining my form thanks to regular lifestyle and eating habit. This European championship was not very difficult for me. I could have easily beaten my rivals but due to my injury from the first game, I wrestled in a controlled way. Anyway, now I have won eight European titles and played in nine consecutive finals," he added.

"Greco-Roman is a very difficult category in wrestling. It is not easy to play in nine finals and win eight titles in this category. One must work really hard to maintain this level of consistency. I will continue working hard and my target is to be among the wrestling legends," he said.

Kayaalp said his only unhappiness is not winning an Olympic gold medal.

"Either I win an Olympics gold or I will take this feeling to my grave. I have won two gold medals in the European and world championships, ahead of the 2020 Tokyo Olympics. If I can win a gold medal in Tokyo, I will be on my way to wrestling greatness. It is very difficult but I believe I can succeed. My only target now is to a win a gold medal in Tokyo. It would be the crown of my career. So the next two years I will take good care of myself and live under strict discipline," he said. He added that Turkey, as a team, displayed some great performances at the European Wrestling Championships in Kaspiysk in Russia's north Caucasus Republic of Dagestan last week.

"We broke Turkey's previous records for title in a single tournament by winning a total of 13 medals – five gold and eight bronze medals. It's our biggest success to date in a European championship," Kayaalp said.

"Our women wrestlers in particular were very good. They won two gold and three bronze medals. I hope we can repeat this performance. I have equaled Hamza Yerlikaya's record of eight European titles. Now I am at my strongest. I believe I have the ability to surpass Yerlikaya," he said.