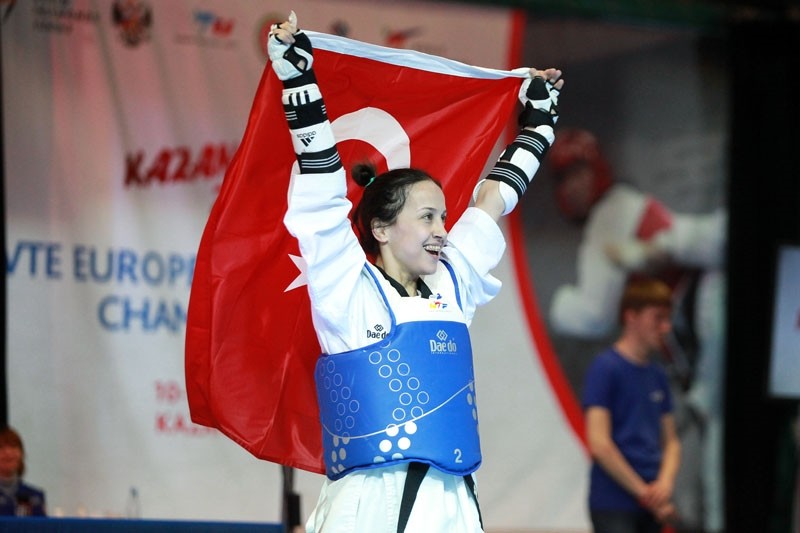 Turkey's Rukiye Yıldırım claimed the women's under-46 kilogram gold medal on the opening day of the European Taekwondo Championships at the Ak Bars sports hall in Kazan, Thursday.

Yıldırım, after her bronze medal in Montreux 2016, came to Kazan determined to win the title. The world No.8 prevailed in the under-46 kilogram category, overbearing world No. 2 and European Champion Iryna Romoldanova and came into a final match against Dina Pouryounes. The Turkish athlete won the match with a 28-10 score, to clinch an unbeaten gold. The Sports Hall Ak Bars welcomed all the European athletes, coaches and officials, who traveled to Kazan from 46 different countries around the continent, for the elite competition. 2016 Rio Olympics bronze medalist, Azerbaijan's Patimat Abakarova, faced the world bronze medalist Kristina Tomic of Croatia in the under-49 kilogram semifinals, which the Croatian won with a score of 12-03. Abakarova was awarded the bronze medal.

Kristina Tomic continued fighting and in the finals came against Natalia Antipenko of Russia, who earlier won 3-2 against France's Yasmina Aziez in the semifinals.

Both athletes were desperate to win their first European title, but, in the end, Tomic came out victorious with a score of 18-12.

Jordyn Smith of Great Britain made her senior debut in the European Championships with a bronze medal in the relevant category. After her latest gold medal in the World Juniors Championships in Hammamet a month ago, the Scottish teenager showed in Kazan that she is more than a promising athlete, taking third place in her first senior fight.