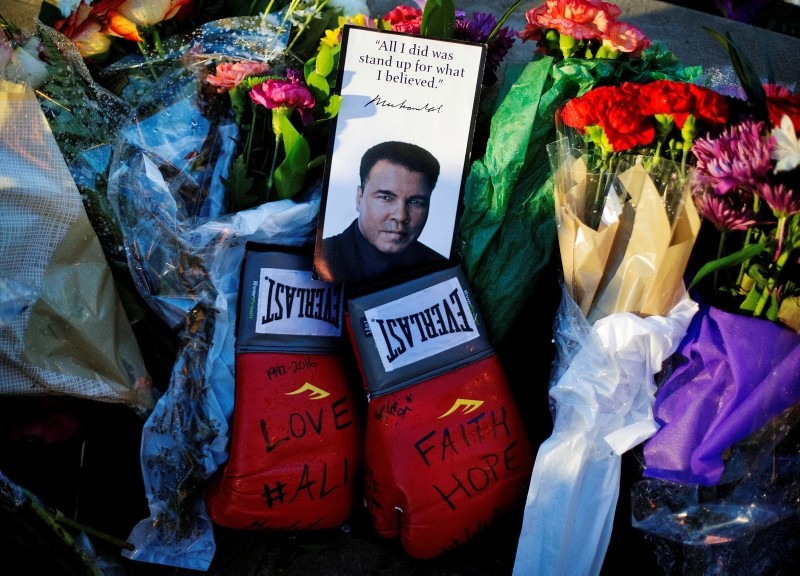 Muslims and Christians, rich and poor, black and white: Muhammad Ali united them in life, and again in mourning two years after the death of the three-time heavyweight champion of the world.

Two years ago, on June 3, thousands of people around the world lined the streets of Louisville, Kentucky, Muhammad Ali's hometown, to honoring the boxing legend, who died at the age of 74, suffering respiratory distress.

On the second anniversary of his death Sunday, people once again were gathered at Ali's gravesite in the state of Kentucky to recall and honor his life.

He had been afflicted for some 30 years with Parkinson's disease, which made it difficult for him to speak in recent decades.

With a wit as sharp as the punches he used to "whup" opponents, Ali dominated sports for two decades before time and Parkinson's disease, triggered by thousands of blows to the head, ravaged his magnificent body, muted his majestic voice and ended his storied career in 1981.

He won and defended the heavyweight championship in epic fights in exotic locations, spoke loudly on behalf of blacks, and famously refused to be drafted into the Army during the Vietnam War because of his Muslim beliefs.

Despite his debilitating illness, he traveled the world to rapturous receptions even after his once-bellowing voice was quieted and he was left to communicate with a wink or a weak smile.

"He was the greatest fighter of all time but his boxing career is secondary to his contribution to the world," promoter Bob Arum told the AP early Saturday. "He's the most transforming figure of my time certainly."

Revered by millions worldwide and reviled by millions more, Ali cut quite a figure, 6-foot-3 and 210 pounds in his prime. "Float like a butterfly, sting like a bee," his cornermen exhorted, and he did just that in a way no heavyweight had ever fought before.

He fought in three different decades, finished with a record of 56-5 with 37 knockouts — 26 of those bouts promoted by Arum — and was the first man to win heavyweight titles three times.

He whipped the fearsome Sonny Liston twice, toppled the mighty George Foreman with the rope-a-dope in Zaire, and nearly fought to the death with Joe Frazier in the Philippines. Through it all, he was trailed by a colorful entourage who merely added to his growing legend.

And rumble Ali did. He fought anyone who meant anything and made millions of dollars with his lightning-quick jab. His fights were so memorable that they had names — "Rumble in the Jungle" and "Thrilla in Manila."

But it was as much his antics — and his mouth — outside the ring that transformed the man born Cassius Clay into a household name as Muhammad Ali.

"I am the greatest," Ali thundered again and again.

Ali spurned white America when he joined the Black Muslims and changed his name. He defied the draft at the height of the Vietnam war — "I ain't got no quarrel with them Viet Cong" — and lost 3 1/2 years from the prime of his career. He entertained world leaders, once telling Philippines President Ferdinand Marcos: "I saw your wife. You're not as dumb as you look."

He later embarked on a second career as a missionary for Islam.

"Boxing was my field mission, the first part of my life," he said in 1990, adding with typical braggadocio, "I will be the greatest evangelist ever."

Ali couldn't fulfill that goal because Parkinson's robbed him of his speech. It took such a toll on his body that the sight of him in his later years — trembling, his face frozen, the man who invented the Ali Shuffle now barely able to walk — shocked and saddened those who remembered him in his prime.

"People naturally are going to be sad to see the effects of his disease," Hana Ali said when he turned 65. "But if they could really see him in the calm of his everyday life, they would not be sorry for him. He's at complete peace, and he's here learning a greater lesson."

The quiet of Ali's later life was in contrast to the roar of a career that had breathtaking highs along with terrible lows. He exploded on the public scene with a series of nationally televised fights that gave the public an exciting new champion, and he entertained millions as he sparred verbally with the likes of bombastic sportscaster Howard Cosell.

Ali once calculated he had taken 29,000 punches to the head and made $57 million in his pro career, but the effect of the punches lingered long after most of the money was gone. That didn't stop him from traveling tirelessly to promote Islam, meet with world leaders and champion legislation dubbed the Muhammad Ali Boxing Reform Act. While slowed in recent years, he still managed to make numerous appearances, including a trip to the 2012 London Olympics.

Despised by some for his outspoken beliefs and refusal to serve in the U.S. Army in the 1960s, an aging Ali became a poignant figure whose mere presence at a sporting event would draw long standing ovations.

With his hands trembling so uncontrollably that the world held its breath, he lit the Olympic torch for the 1996 Atlanta Games in a performance as riveting as some of his fights.