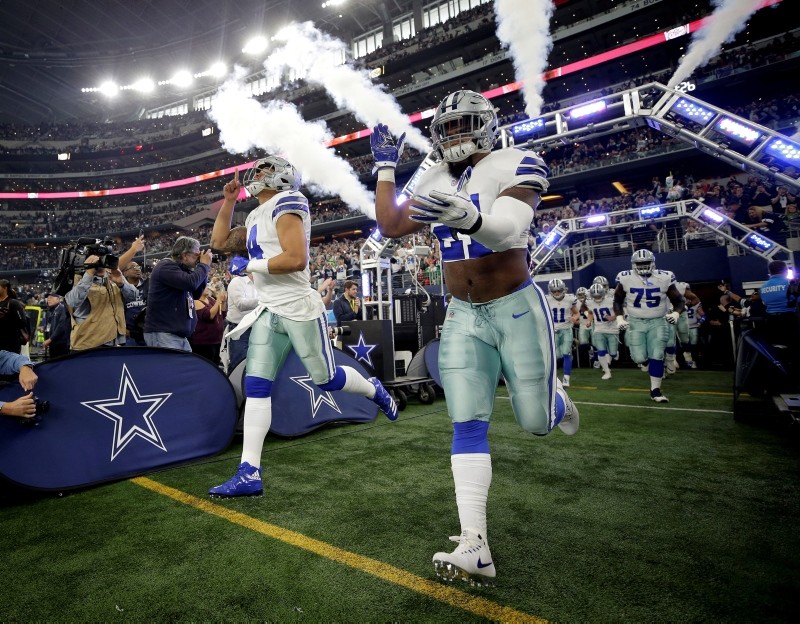 Dallas Cowboys running back Ezekiel Elliott (21) and quarterback Dak Prescott (4) run onto the field before a game against the Seattle Seahawks at AT&T Stadium in Arlington, Texas, U.S., Dec. 24, 2017. (Erich Schlegel-USA Today Sports via Reuters)
by French Press Agency - AFP
Jul 18, 2018 12:00 am

With a 14 percent leap in value to $4.8 billion (4.12 billion euros), the NFL Dallas Cowboys on Wednesday topped the annual Forbes magazine list of the world's highest valued sports teams for the third consecutive year.

The Cowboys boasted the top revenues of $840 million and top earnings of $350 million of any club and were followed on the 50-team list in order by global football powers Manchester United, Real Madrid and Barcelona.

England's Man United was second overall at $4.12 billion, rising 12 percent and up one spot from the 2017 list, while Real Madrid jumped from fifth to third, up 14 percent on $4.088 billion, keeping Barcelona in fourth on $4.064 billion, up 12 percent from last year.

The Cowboys, owned by Jerry Jones, are boosted by non-NFL events at their $1.2 billion home stadium, nicknamed "Jerry World."

In all, the world's top 50 clubs were together worth a combined $137 billion with the average current value at $2.74 billion, up for $2.5 billion last year. Just to make the list takes a value of $1.95 billion, the NFL Cleveland Browns in the 50th spot but still up $200 million from last year.

The NBA's Houston Rockets made the biggest gain on the list, jumping 14 spots to 40th on $2.2 billion after Tilman Fertitta bought the team for that price last October. The Rockets lost to eventual NBA champion Golden State in this year's Western Conference final.

Record sales prices for clubs in other sports saw the NFL Carolina Panthers go for $2.3 billion and baseball's Florida Marlins go for $1.2 billion.

Golden State Warriors, ranked 10th at $3.1 billion after a third title and fourth finals appearance in four seasons, jumped 10 spots and the Brooklyn Nets, ranked 36th on $2.3 billion, also rose, in part due to the league having the best global growth potential.

The NFL remains the world's richest sports league with unmatched television deals worth $255 million per club helping put 29 of its 32 teams on the top-50 global list. There were eight NBA teams, six MLB clubs, seven European football clubs and no Formula One or National Hockey League teams.