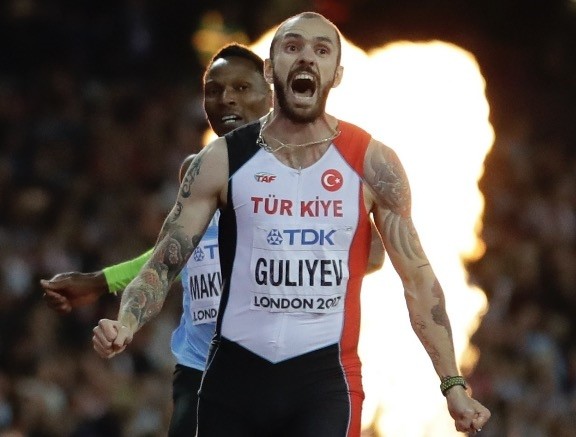 Athletes all over Turkey are bracing for Europe's top sports event - the European Athletics Championship - set to start next week. The 2017 200-meter world champion Ramil Guliyev expects ‘three golds' this time around as the country raises its profile in the world of athletics

Turkey's elite athletes are getting ready for the European Athletics Championship that will open in Berlin, Germany on Aug. 7.

Some 42 athletes - 31 men and 11 women - are expected to represent the country that stepped into the sporting spotlight in recent years.

Ramil Guliyev, the 2017 200m world champion, says he expects at least three gold medals for himself this year. "They be better yellow," he said jokingly, though he cautiously added that there is "no such thing as certainty in sports."

The 28-year-old sprinter, Guliyev brought Turkey its first gold medal in the men's 200m at the IAAF World Championships last year. He says he is in top form for the 100m, 200m and the 4 x 100m relay. He said a change of rules that allows athletes to qualify for the semi-finals if they make it to top 12 rankings is to their advantage.

"You can finish the race without losing strength now," he told Anadolu Agency.

Still, Guliyev is concerned about two of his rivals. He doesn't give their names but one of them he's talking about is surely Christophe Lemaitre. Lemaitre, France's reigning 200m bronze medalist, is a four-time champion in European athletics competitions.

Meanwhile, other Turkish participants are also confident they will also be successful. The country garnered 12 medals in the 2016 edition of the biannual event, including four gold, five silver and three bronze medals. One of the most important contests in the world of athletics, the championship is part of the first multi-sports European Championships seeking to make Europe central to the sports world.

Fatih Çintimar, head of Turkish Athletic Federation, says that the Turkish team is largely made of the delegation that is planned to represent the country in the upcoming Tokyo and Paris Olympics. Çintimar says they are expecting multiple wins from their star athletes Ramil Guliyev, Yasmani Copello, Eşref Apak and Eda Tuğsuz.

"We want to have a place in top five and as a team and among the top 10 in the world," he told.

"Our past accomplishments set the bar high for us but you have to accept any result in sports due to injuries and other factors. We cannot risk our athletes for the Olympics," Çintimar said, preemptively dismissing any criticism if athletes underperform. Still, he said that he is counting on each athlete, saying each athlete has a chance to "make it to the top three." "Turkey is Europe's only country rising in athletics according to statistics," he added.