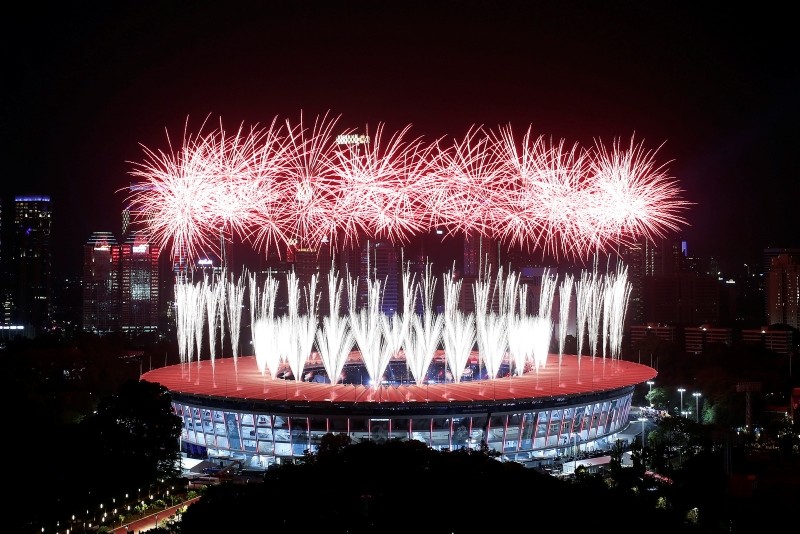 Indonesia President Joko Widodo declared the 18th Asian Games open in a glittering ceremony on Saturday, launching what promises to be a frenetic fortnight of breathless sporting action featuring the best of the continent's athletes.

Some 13,000 athletes will compete in 40 sports and 67 disciplines, including new additions such as bridge, jet skiing and roller skating in the biggest multi-sport extravaganza outside the Olympics.

E-sports debuts as an official demonstration sport in Indonesia, which volunteered to host the Games after Vietnam pulled out in 2014 because of financial concerns.

The Games, which conclude on Sept. 2, are the first co-hosted by two cities with Palembang on the island of Sumatra acting as venue for some sports along with the capital Jakarta.

Kuwait will participate under their own flag a couple of days after the International Olympic Committee lifted their ban. 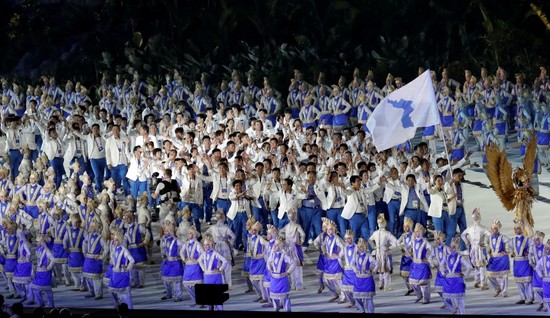 Thousands of spectators cheered wildly as athletes from the rival Koreas paraded side-by-side behind a "unification" flag in a spectacular opening ceremony for the Asian Games.

The two countries, still technically at war after their 1950-53 conflict ended in an armistice, have fielded 60 athletes in combined teams along with larger contingents for their respective national squads. North and South Korean athletes are competing together in three sports.

High-ranking politicians from both Koreas watched as the athletes, many holding hands, paraded by in blue and white uniforms on Saturday night behind South Korean basketballer Lim Yung-hui and North Korean soccer player Ju Kyong Chol, who together carried the flag.

It was a virtual repeat of the joint march involving athletes from the North and South during the Winter Olympics in February in the South Korean ski resort of Pyeongchang — but without the gloves, parkas and fur hats.

Aside from the rousing applause for the Koreans, teams from Palestine, Syria, Taiwan and Indonesia received extra bursts of enthusiasm from the crowd.

Korean spectator Hwang Miri said the sight of the athletes marching together made her feel unification of the two countries was possible in her lifetime.

"Looking at all of these people working together and playing together, even walking all together in this unified uniform and the unified flag, it is such an enormous feeling," Hwang said.

Tensions between the two countries have ebbed this year with a historic meeting between their two leaders at the heavily fortified border.

The opening ceremony began with a slickly produced video portraying Indonesian President Joko "Jokowi" Widodo stuck in traffic — a witty play on one of Jakarta's major challenges in hosting the games — donning a black helmet and jumping a motorbike over a ramp to reach the stadium in time.

The motorbike shown in the video sped into the stadium and its helmeted driver disappeared into a tunnel before the real Jokowi appeared in the VIP area. 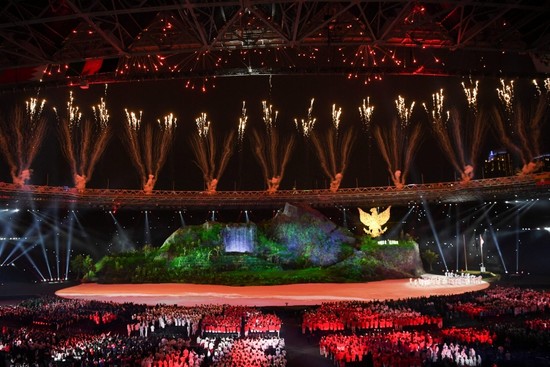 Much of the stadium has been filled with a rainforest-covered volcano that formed the backdrop for a show based on air, earth, wind and fire themes and featuring thousands of performers representing the dozens of ethnic groups in Indonesia, a country of more than 260 million people.

Organizing chairman Eric Thohir said the games would highlight Indonesia, the world's most populous Muslim nation, as a model of harmony and emphasize the diversity of Asia.

About 1,500 dancers in traditional dress then performed a tightly choreographed routine before Afghanistan led the athletes' parade into the stadium.

There were huge cheers when the two Koreas, whose athletes together number about 1,000, marched in together wearing pristine white and blue uniforms.

Widodo was then seen dancing in his seat as Indonesian singer Via Vallen took to the stage, before the stadium fell silent to honor the victims of the recent Lombok earthquake.

"You can feel proud of your home country Indonesia," said Sheikh Ahmed Al-Fahad Al-Sabah, president of the Olympic Council of Asia, before Widodo declared the Games open -- an announcement which triggered a volley of fireworks.

It provided a vibrant start to the Games, whose build-up has been dogged by logistical headaches and security fears after Indonesia suffered its deadliest terror attack in a decade in May.

Indonesia has also been grappling with its latest earthquake disaster after strong tremors in Lombok, an island in the east of the vast archipelago, left more than 400 people dead.