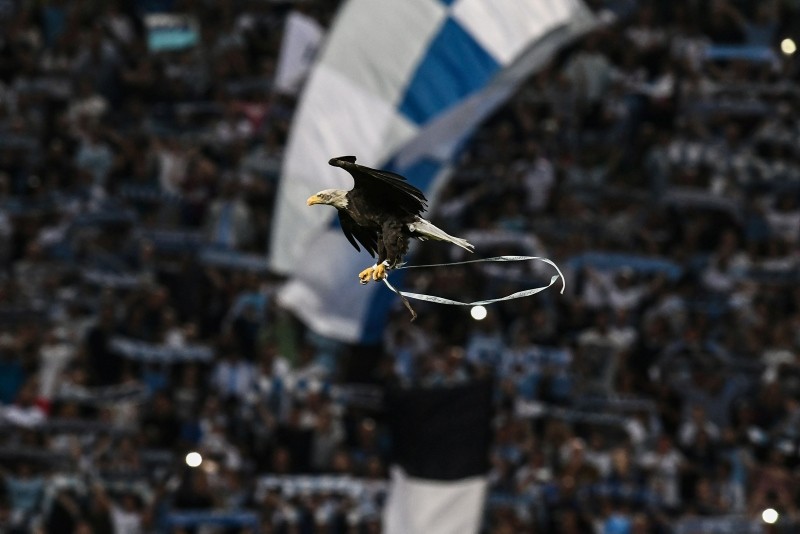 The mascot Eagle of Lazio's football team flies over the stadium prior to the Italian Serie A football match Lazio vs Napoli at the Olympic stadium in Rome on August 18, 2018. (AFP Photo)
by Compiled from Wire Services Aug 20, 2018 12:00 am

Lazio's "ultra" fans have caused outrage by telling women to avoid their "sacred space" in the club's Stadio Olimpico.

The die-hard supporters distributed flyers ahead of their team's Serie A opener at home to Napoli, which ended in a 2-1 win for the visiting side.

"The Curva Nord represents for us a sacred space, an environment with an unwritten code to be respected," read the flyer. "The first few rows, as always, have been experienced like the trenches. In the trenches, we do not allow women, wives and girlfriends, so we invite them to position themselves from the 10th row back.

"Those who choose the stadium as an alternative to a carefree and romantic day in (Rome's) Villa Borghese (gardens), should go to other sections."

Lazio spokesman Arturo Diaconale told Italian news agency Ansa on Sunday that "it is not the position of the club, we are against any discrimination."

He added: "Moreover, there is an enormous number of Lazio fans, this instead is an initiative from a few fans. We can't always intervene to avoid politically incorrect displays like this."

Italy's football federation chief on Monday slammed as a "bad joke" the call by die-hard Lazio ultra fans to ban women to the back rows of the Olympic Stadium in Rome.

"It was the bad joke of the summer," FIGC commissioner Roberto Fabbricini told Radio Anch'io Sport on Monday.

"When we talk about a stadium that must go back to being a meeting point for families, ghettoizing a group of people seems very stupid to me."

Italian media reported that those who distributed the leaflets had been identified by police using video footage who have passed their findings on to prosecutors.

Investigators were using video footage for the identification and could press charges for discriminating behavior.

Some Lazio fans caused outrage last season when they littered the Stadio Olimpico in Rome with images of Anne Frank — the young diarist who died in the Holocaust — wearing a jersey of city rival Roma. Lazio was fined 50,000 euros (then $63,000) by the Italian soccer federation because of the anti-Semitism displayed by the team's fans.

It was the latest in a series of racist and anti-Semitic incidents, with Lazio previously having its stadium fully or partly closed for European and domestic matches as punishment.