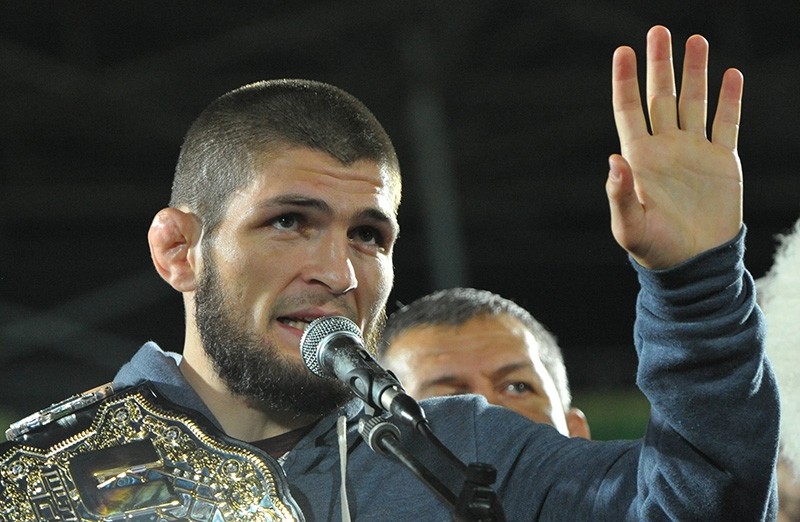 Russia's Khabib Nurmagomedov, UFC lightweight champion who defeated Conor McGregor of Ireland in the main event of UFC 229, speaks during the ceremony of honouring him at Anzhi Arena in Kaspiysk, Dagestan, Russia Oct. 8, 2018. (Reuters Photo)
by Compiled from Wire Services
Oct 11, 2018 12:00 am

UFC fighters Khabib Nurmagomedov and Conor McGregor are being suspended by the Nevada Athletic Commission for a brawl that erupted inside and outside the octagon after their lightweight title fight last weekend in Las Vegas, an official said.

A commission investigation is pending and the panel can extend the temporary suspension when it meets Oct. 24, Bennett said. Nurmagomedov and McGregor could also appeal Bennett's executive action at that time.

Nurmagomedov, a 30-year-old Russian, kept his UFC lightweight crown with a fourth-round submission victory over Ireland's McGregor in Las Vegas, improving to 27-0 in his professional career and 11-0 in UFC bouts.

After the victory, Nurmagomedov climbed out of the octagon and went into the crowd to attack a member of McGregor's entourage who had been heckling him throughout the fight.

On Thursday, Nurmagomedov threatened to leave the UFC if the MMA promoters fire teammate Zubaira Tukhugov for striking McGregor in the post-fight melee Saturday.

Tukhugov, who is from Chechnya, was seen in a brief exchange with McGregor during the post-fight brawl. McGregor was confronted by three members of Nurmagomedov's team in the melee but later said he would not press charges.

Tukhugov had been scheduled to fight a teammate of McGregor, Artem Lobov, later this month but that bout has been canceled.

Nurmagomedov told the UFC in no uncertain terms that any move to cut ties with Tukhugov would see him follow his teammate away from the UFC.

"If you decide to fire him, you should know that you'll lose me too," Nurmagomedov posted on Instagram and Twitter.

"We never give up on our brothers in Russia and I will go to the end for my Brother. If you still decide to fire him, don't forget to send me my broken contract, otherwise I'll break it myself.

"You canceled Zubaira's fight and you want to dismiss him just because he hit Conor. But don't forget that it was Conor who had hit my another Brother FIRST, just check the video."

"You can keep my money that you are withholding," Nurmagomedov said. "You are pretty busy with that, I hope it won't get stuck in your throat. We have defended our honor and this is the most important thing. We intend to go to the end."

Nurmagomedov could face a fine and suspension from the NAC for his actions after the fight, although UFC president Dana White said he would not be stripped of his title for the post-fight fiasco.

McGregor tossed a steel dolly through a window on Nurmagomedov's bus in April in New York, a provocation the Russian noted in his message.

"I would like to address @ufc. Why didn't you fire anyone when their team attacked the bus and injured a couple of people? They could have killed someone there," he said.

"Why no one says anything about insulting my homeland, religion, nation, family? Why do you have to punish my team, when both teams fought. If you say that I started it, then I do not agree, I finished what he had started.

"In any case, punish me, @zubairatukhugov has nothing to do with that. If you think that I'll keep silent then you are mistaken."