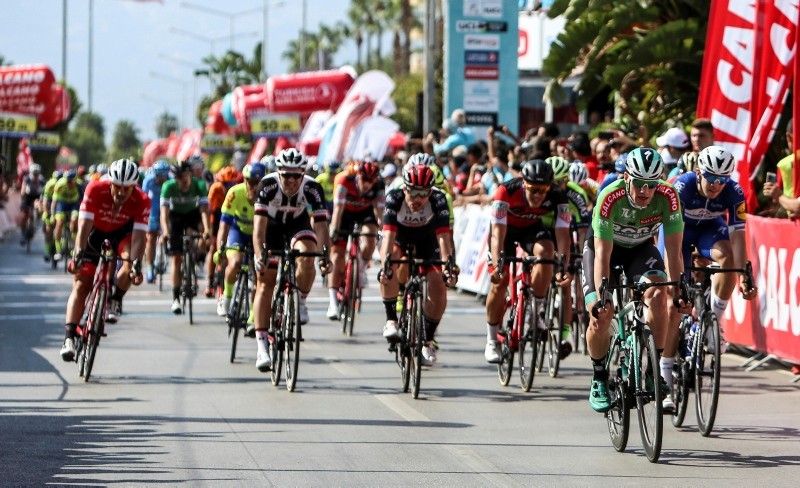 Spanish cyclist Eduard Prades claimed overall victory in the Tour of Turkey after pushing Andrey Lutsenko into second place in the final stage. Prades won thanks to a six-second time bonus and superior placings over the six-day competition

Completing the last sixth stage of the Tour of Turkey in second place, Euskadi Murias' Prades ​snatched the victory from Kazakh Alexey Lutsenko, who was leading the general classification after five stages.

Prades and Lutsenko finished the tour equal on time, but the Astana Pro cyclist finished only 13th in the last stage.

Katusha-Alpecin's Nathan Haas, who had been four seconds down in second and hoping to go for the win today, finished third overall, at four seconds. Diego Ulissi (UAE Team Emirates) was fourth, also at four seconds.

Sam Bennett (Bora-Hansgrohe) won the final stage, opting to attack with more than a kilometer to go rather than wait for the narrow sprint finish. He stayed away to celebrate with his arms in the air.

BMC Racing's Jempy Drucker was third. The last two kilometers were curving and slightly climbing and Bennett jumped from the rushing field with 1.5 km to go.

The Irish rider quickly built up enough of a gap that he was able to take out in the final hundred meters and savor his win.

The decisive final stage to Istanbul featured a rolling course with one categorized climb and a ride through the Eurasia Tunnel, connecting Anatolia and Europe, 100 meters underneath the sea.

After nearly 90 km, the octet had just over three minutes on the field. That gap gradually dropped and with 48 km left, it was down to 1:15. With 44 km to go, Masson had to drop out of the group after his pedal came off the spindle.

Multiple bike changes threw him further back and Atalay also left the group.

With the overall victory still up for grabs, the break group never had a chance, with the peloton also keen to fight for overall victory. Mihaylov was the next to be dropped, as the Eurasia Tunnel approached.

The 5.4-km long tunnel was only two lanes wide but relatively well-lit. Vervaeke jumped from his remaining three break companions in the streets of Istanbul but he too was soon caught with 6.5 km left.

The front of the field was tightly packed as the sprinters' teams wanted to set up their leaders for the stage win, whilst Astana and Katusha were fighting for the overall classification.

The narrow, twisting finish broke up the field and the sprint trains. Bora-Hansgrohe lead out Bennett but hit the front too early. Bennett took control and jumped with 1.5 km to go, challenging his sprint rivals.

Nobody had the speed or team to chase him, with Zdenek Stybar (Quick Step Floors) soon easing up. Bennett used his power to stay clear and celebrated in style, finishing six seconds ahead of the chasing field.

A crash in the field on a late corner shuffled the peloton and cost Lutsenko a better place and perhaps overall victory. Prades was ahead of him and made sure he finished second to set up his smash and grab overall success.

For the second time, the Tour of Turkey was part of the World Tour category. This year's edition found 20 teams from across the world, including the Turkish national team, race in a six-stage tour that started in Konya on Oct. 9. The Tour of Turkey was broadcast in more than 120 countries.

Organized by the Turkish Cycling Federation, the Presidential Cycling Tour of Turkey debuted in 1963 and became an international race two years later. Some 140 cyclists, 20 teams, including nine "World Tour" teams raced in the Tour of Turkey.