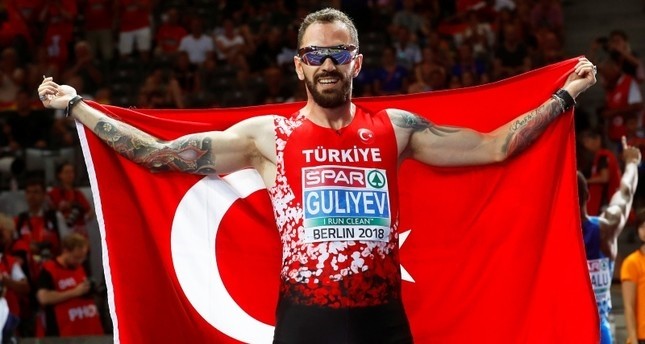 Turkish athlete Ramil Guliyev has been shortlisted for the European Athletics Association's (EAA) thlete of the year award. Guliyev won the 200-meter title at the European Championships in Berlin in August, setting a championship record of 19.76 seconds.

The four other nominees include Swedish pole vaulter Armand Duplantis, who won the gold medal at the 2018 European Championships; Norwegian middle-distance runner Jakob Ingebrigtsen, who achieved a 1500m/5000m double at the European Championships, becoming the youngest European champion, and France's Kevin Mayer, the men's decathlon world record holder. The European athletics governing body will present the award at the Golden Tracks Awards Night in Lausanne, Switzerland on Oct. 26.

Guliyev, who is originally from Azerbaijan but gained Turkish citizenship in 2011, secured his first gold medal for Turkey last year, in the men's 200 meters at the International Association of Athletics Federations World Championships in London.